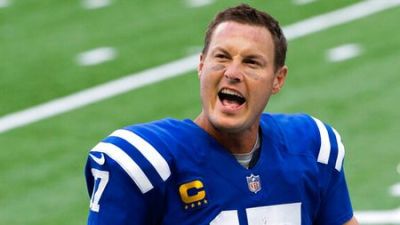 You can hope Philip Rivers will be mouthing off to opponents through January, but don’t expect it.

If Colts fans feel a sense of deja vu this season, who can blame them?

November weather in Indianapolis tends toward the bleak, but the Colts need to avoid mirroring the weather if they are going to return to the playoffs for the first time without Peyton Manning or Andrew Luck as their starting quarterback since 1996.

In 2019, the Colts started 5-2.  Fans looked ahead to the playoffs with great anticipation.  Then starting quarterback Jacoby Brissett got hurt in Pittsburgh, and the season unraveled as Brian Hoyer and then a less than 100% finished the season’s final nine games with just two wins.

A well-executed offseason plan brought a slight upgrade at QB with Philip Rivers, a significant free agent signing in DeForest Buckner to anchor the defensive line, and then a draft with weapons upgrades at running back and wide receiver.

The result has been a 4-2 record with a very winnable game looming this Sunday in Detroit.  The Colts should be back at 5-2 – as long as Matthew Stafford and the Lions cooperate.

And then, a very tough stretch of four games are immediately ahead that will determine whether the Colts are able to win the AFC South or return to the playoffs as a wild card.  Baltimore comes to Lucas Oil Stadium for the first test.  They are followed by a road trip to Nashville for a duel with the Titans – the only team capable of taking a division title from the Colts.  November ends with two home tilts – against Aaron Rodgers and the Packers, and a second matchup against the Titans.

All four of those teams are 5-1 right now, and the Colts are unlikely to be favored in any of them.  Beat the Lions and then two of the following four, and the world is the Colts’ horseshoe.  Lose against the Lions, or tank the following four against teams that are superior on paper, and a trip to the playoffs becomes a pipe dream.

Not to burden you with additional scheduling minutia, but if they can hold it together through November, December provides significant relief.  The Texans and Jags suck, and they comprise three of the final five opponents.  The others are the 3-3 Raiders and currently undefeated Steelers.

If you are excited and optimistic about the Colts, that’s good.  We need something to keep our spirits up, and I’m not trying to take a leak on your Frosted Flakes.  The Colts have been about what we thought they would be.  Rivers can keep them in games, but is unlikely to bring them back from the nearly dead.  The defense has been better with Buckner up front.

Funny things happen.  Maybe this year will be funny.  Maybe not.  But make sure expectations are informed by a dash of reality.  A 5-2 record will not become 14-2, and Rivers is not Manning.

While the Colts await the next Manning, Rivers will have to do.  And maybe he will catch lightning in a bottle, but remember he took the Chargers to the playoffs only once during his last six years in either San Diego or Los Angeles.  He is who he is.  We’ll see whether he’s good enough to play in the middle of January, when Indiana’s weather goes from bleak to miserable.

As River is fond of saying, “Nunc Coepi.”  The Colts need to begin again at least 11 more times this season.