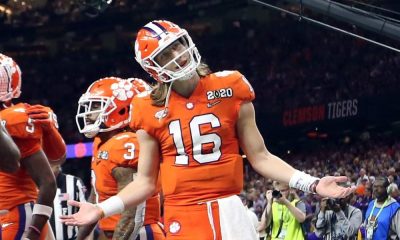 Should Trevor Lawrence jump to the NFL in 2021 or stay at Clemson? Only sure thing is that playing for the Jets would be an act of idiocy.

Trevor Lawrence has long been college football’s best quarterback prospect.  Because of what he said this week about the possibility of staying at Clemson for his senior year, he might also be the smartest.

About his decision to either stay or bounce to the NFL, Lawrence said yesterday, “My mindset’s been that I’m going to move on, but who knows?  There’s a lot of things that could happen. I’m just really focusing on this year and not trying to look ahead. … That’s a tough one, but we’ll see how it all unfolds.”

This confounds the media and many fans.  How can a quarterback who would earn millions of dollars spurn playing for the New York Jets, the likely holder of the #1 overall pick, to stay for a fourth year at Clemson?  Let’s ask the question is a different way, in what way would Lawrence’s life improve by leaving Clemson before he had to to play for the NFL’s worst franchise?

Well, there is the wealth he would immediately accrue.  Joe Burrow signed a rookie deal similar to what Lawrence would likely get.  It guarantees him $36M over his first four years with the Bengals.  There is also endorsement cash that would be substantial.

And then there is…well, the…hmmm…ummm, well, oh yeah, how about the chance to compete against the very best football players in the world?  Only downside to that is the best are on both sides of the ball, and very few of the best are on the Jets – hence what could be an 0-16 record this year that earns them the chance to draft Lawrence in the first place.

Being chased and pummeled by the best is not nearly as much fun as playing behind the best line while throwing to the best receivers.

Not much of a list on behalf of jumping to the Jets.  Not that there is anything wrong with cash, but the same cash will be there in a year, and if Lawrence’s career is anything like it is projected to be, he’ll never miss the money.  That assumes he would make less in the aggregate by coming out a year later, and that is no sure deal.  How much did current Jets QB Sam Darnold forfeit by reporting for duty with the Jets in 2018?  His career reversal could cost him tens of millions.

On the other hand, the negatives are significant.  Being locked into the Jets for the first seven years (minimum) could leave a mark.  That same organization drafted Darnold #3 overall, and they are ready to throw what’s left of his talent into the wood chipper.

Over Darnold’s 31 starts, the Jets are 11-20.  If losing is your thing, the Jets are for you.  This is a franchise that has not been to the playoffs in a decade (including this already lost season), and are 21-50 over the last five seasons.

At Clemson, Lawrence is part of a thriving football family that has gone to the four-team national playoff for five consecutive years, has won two of the last four National Championships, and is ranked #1 right now.

Lawrence is at home with teammates at Clemson who are not yet tasked with supporting families through football earnings (at least we presume so), and so the experience is not defined by the drive to earn that next contract.

Those around him don’t have their hands out – at least not yet.  No reason not to trust those who approach him.  There is a freedom to poverty that makes college very comfortable for everyone.  No one has great wealth yet, so a college campus is a melting pot for similarly resourced souls.

There’s nothing wrong with cash, but the way people like Lawrence are advised to pursue it at the cost of all else is absurd.  The measure of a man’s worth has nothing to do with the number of zeroes at the end of his bank statement – a concept Lawrence already seems to grasp.

Whether Lawrence stays at Clemson or demands a trade from the Jets, I wish him the best of luck. For a young man this smart, those have to be the only choices, right?