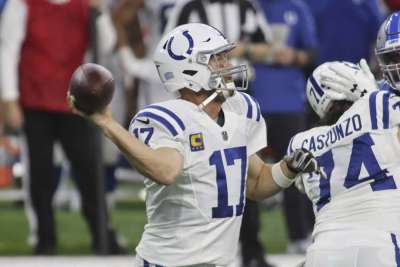 Philip Rivers throwing motion is mocked when he throws picks and cheered when his receivers make the catch – just like everything else he does.

In 24 hours, Colts fans have gone from ready to listen to CBS Sports Jason La Canfora’s call for the Colts to bench quarterback Philip Rivers to campaigning for him as a possible NFL MVP.

That’s a severe flip – the kind of flip that serves as evidence of mental illness.  It’s like someone wearing a MAGA hat to a Trump rally stopping to loot the Best Buy on his way home.  And it’s not Colts fans’ fault for being so manic depressive about the Colts’ ability to win with Rivers at QB.  Last night, Rivers was quite good as the Colts pounded the Titans.  Five days earlier, he was terrible in the second half as they lost to the Ravens.

As usual, the truth lies somewhere in the middle.  Rivers as an MVP candidate is preposterous.  He’s not even the MVP of his own team.  Comparing him to Patrick Mahomes, Kyler Murray, Aaron Rodgers, and Russell Wilson is a conversation ender for NFL fans who know anything about the game, but it speaks to the competence Rivers shows when he plays clean.

As for benching Rivers, he ranks fifth all-time in passing yardage.  Granted, he’s never played in a Super Bowl, but he is still a quarterback who is not going to be cast aside for Jacoby Brissett or Jacob Eason.

Rivers’ avoidance of errors is a big reason for Colts wins, and his propensity for errors is the primary reason they lose.  His wild swings from good Phil to bad Phil have caused Colts fans to argue with themselves – a condition from which they will likely continue to suffer.

As Colts fans, we are not good at massive week-to-week fluctuations in quality of play.  Bears fans are subject to that kind of emotional upheaval, not Colts fans.  During seasons like 2008 and 2018, there were slow starts followed by furious finishes.  In 1997, 1998, and 2011, the Colts were terrible.  In between, there was a lot of excellence and some mediocrity, but in most cases the level of play was predictable.  In 2020, there has been dominance and accommodation in almost equal measure separated by just a few days.

There is nothing more telling about the Colts successes and failures than turnovers.  When the Colts have turned it over twice, they are 0-3.  With one or none, they are 6-0.  As it should be, Rivers is blamed when throwing picks and credited when he doesn’t.  Fans are alternately furious and thrilled depending upon which version of Rivers shows up.

And there are another seven games left in this wacky season for fans and media to overreact to.  In nine days, Rodgers and the Green Bay Packers visit Lucas Oil Stadium.  There is no telling which Rivers will come out to play that day.  The only sure thing is that witnesses will either embrace or reject him as a result – until the following Sunday when the same Titans team the Colts kicked the hell out of try to exact their revenge and the flip will flop or flop will flip.

Buckle your seatbelts – this ride up and down these Rivers is going to be bumpy.