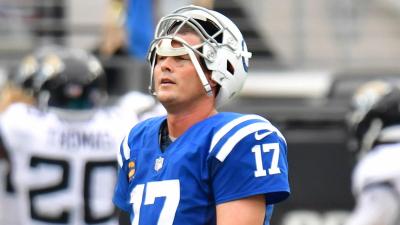 Whatever Philip Rivers has left in the tank, he needs to show it for eight weeks if the Colts are going to bring him back in 2021.

Halfway through the 2020 season, the Indianapolis Colts are 5-3.  A tough test against the Titans tonight in Nashville will kick off the second half of a season that could still break in any direction.  What you believe about the Colts will either be proven or debunked – depending upon how they play and what you believe.

The Colts are either a mediocre team that benefitted from a relatively poor first seven opponents, or a good team that has positioned itself to take flight against some of the NFL’s best.

It’s possible that the team catches fire and runs off a series of wins to establish themselves as a tough out come January.  Or, they may play to their current rankings, and struggle against a gauntlet of tough teams jockeying for their own postseason runs.

That’s the great thing about football – at the end of 16 games, you will be what your record and numbers say you are.  The numbers for Rivers through eight games are neither surprising nor exceptional.  They reflect the level of play he showed with the Chargers over his last six seasons there.

Rivers is currently ranked #19 among starting quarterbacks in both QBR and by Pro Football Focus.  You might ask how the Colts are 5-3 with a quarterback ranking outside the top half in the NFL.  Well, it’s helped that QBR rankings of his opposing QBs have been even worse than his, averaging a ranking of 23.25 with none inside the top 14.

That will change tonight when the Colts begin games against a run of six opposing quarterbacks who are statistically superior to Rivers in many ways.  Add to that the superior records of those teams (four-games over .500 as opposed to 15-under for their first eight opponents), and the challenge is clear – to improve enough in the second half to finish with the same 5-3 record they cobbled together during the first half.  At 10-6, a trip to the playoffs is not assured, but likely.

It’s hard in the NFL to outplay your quarterback, and the Colts with Rivers at the helm of the offense has not exactly been dynamic.  That’s especially true when you check the stats Rivers has cobbled together while throwing to wide receivers.  Granted, the Colts aren’t brimming with electric options, but completing 92 of 145 targets for 1,127 yards, 2 TDs, and 5 INTs belies a lack of ability to stretch the field.  In today’s NFL. it’s hard to win when averaging less than eight yards per pass attempt to wide receivers.

In a post yesterday, Jason La Canfora of CBS Sports called for the Colts to bench Rivers “before it’s too late.”  I’m not going that far because the alternatives are not likely to be an upgrade, but if Rivers is an elite quarterback as Frank Reich continues to suggest, tonight would be a great time for him to show it.

Rivers and the Colts have eight weeks to punch their ticket to the playoffs, or the quarterback carousal in Indianapolis should continue to spin.