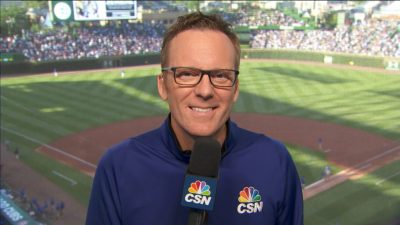 Some mornings, news breaks that needs to be checked, re-checked, confirmed, and then I’m still not sure it’s true because it just doesn’t compute.  Len Kasper bolting from his gig as the Chicago Cubs TV play-by-play guy to do radio for the White Sox qualifies.

Kasper has been a companion to Cubs fans for 16 seasons – through the demolition of the team that was five outs away from the 2003 World Series to back-to-back playoff appearances in 2007 and 2008 through another rebuild, and finally a World Championship in the midst of a six-year run of competence just ended.

Team voices like Kasper become friends welcomed into homes through bad times and good, and for those who follow the Cubs, Kasper was really the third such friend, following Jack Brickhouse and Harry Caray.  Sure, Chip Caray and Thom Brennaman both called Cubs games, but they were comparative short-timers – and generic short-timers at that.

These types of guys just don’t leave that job without a really good reason.  Brickhouse retired and was replaced by Caray, whose value the White Sox failed to realize.  Of all the personnel moves the Cubs have made in their nearly 150 years of existence, hiring Caray away from the Sox was probably the most lucrative.

When the Cubs were broadcast on WGN-TV, that job might have been the best in sports.  Rarely does a local team have a national network and presence.  For Caray, it was perfect.  Live at the Ambassador East, commute to Wrigley, travel first class, enjoy baseball, and develop a national brand.

The Cubs are no longer on a national network.  In fact, there are a lot of people in Chicago who are unable to watch the Cubs because of shortsighted clearance negotiations between the Marquee Network and carriers like Hulu and Youtube TV.  The Cubs charge roughly $6/month for their Marquee product, and that’s a lot of jack for roughly 500 hours of meaningful programming during an entire year.  In addition to the games, they also have replays of old games (not bad in a pinch) and trivia contests between former Cubs (terrible).

I could go on and on about the weak sauce collar programming for Cubs games, but you are way ahead of me if you watch.  The point is that the Cubs job behind that pseudo-paywall is not nearly the gem it once was.  Kasper knows it, picked up his phone when it rang, and now the White Sox have Jason Benetti and Steve Stone on TV (the best pairing in MLB) and Kasper and Darrin Jackson on the radio.

The Cubs?  Reports are that Chris Myers will take over for Kasper.  I love Myers as a broadcaster.  There are few guys in the business as hard-working and professional as Myers, but as the next link in the Brockhouse-Caray-Kasper chain, it is an odd fit.  Myers is a by-the-book national voice, and the Cubs job requires a local partisan.  Cubs fans want to live and die with a broadcaster, not listen to Myers describe dispassionately the events of a three-hour marathon.

Maybe there were other reasons for Kasper to leave the job every Cubs fans pined for as a kid.  We’ll never know.  Kasper is too classy to go out with complete transparency.  His tweets this morning were filled with saccharine gratitude to the Cubs, the Sox, and everyone else drawing breath in Chicago and beyond.  That’s not criticism, by the way.  His tone was as it should be. but that doesn’t make it any less nauseatingly sweet.  Burning bridges is fun and satisfying in the short-term, but memories of a walk-out smackdown burn brightly to the grave.

The question of why Kasper would decide to change his work address from the beauty and wonder of 1060 West Addison to the urban blight at 35th & Shields will haunt Cubs fans for a long time to come.  Choosing the White Sox over the Cubs seems absurd – like opting for a walking taco and carton of milk at a school cafeteria  over a pork chop and beer at Harry Caray’s.

The Cubs appear to be an organization more intent on positive cash flow than satisfying employees and keeping fans.  Jon Lester, Theo Epstein, Kyle Schwarber, and now Len Kasper are gone.  Maybe they will move Harry Caray’s statue to an even more distant outpost again if they run out of human beings to alienate.