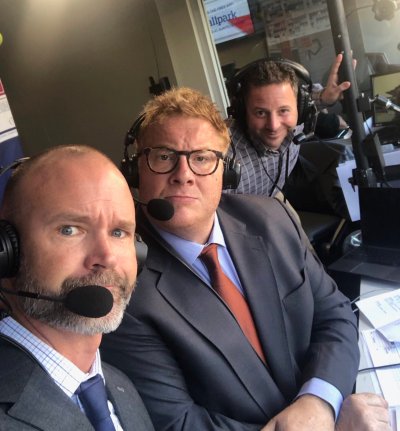 Among many obvious reasons Jon Sciambi was a great hire as TV voice of the Cubs – a close relationship with manager David Ross from when they worked games together for ESPN.

While I enjoy taking shots at the Cubs fan cash grab that the Marquee Network is, it’s hard to argue with former ESPN voice Jon “Boog” Sciambi as the replacement for Len Kasper as TV voice of the Cubs.

Sciambi brings a big personality, broadcasting acumen, a baseball knowledge to the booth in a way few others can match.

Initially Chris Myers, already a part of the Marquee roster, was floated as a potential replacement.  Fans, including me, went off the rails in protest.  Myers is a good guy and broadcaster, but lacks the personality to be the heir to the Brickhouse/Caray throne.  It can be argued that Kasper did as well, but after a while his milquetoast-ness sort of grew on us.

Here are the differences between Kasper, Sciambi, and Myers:

Somehow, I feel slightly less stupid for changing carriers because of who carries Fox Sports Indiana and the Marquee Network, and I thank Boog for that.  If he had turned down the gig, there is no telling who the Cubs would have forced into my living room.