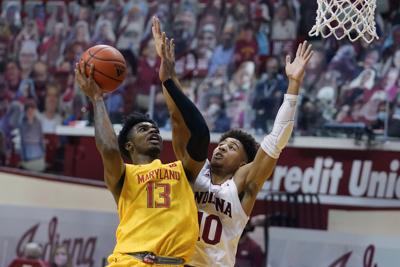 Archie Miller’s Indiana team is at its best when the opponent tries to score.

Indiana won 63-55 over Maryland last night,  We don’t argue with winning around here, so we won’t grouse about the negatives.  If we did, there would be more than a few scabs to pick at with these non-shooting Hoosiers who tallied a measly 21 points in the first half.

We could talk about Indiana’s bizarre ineptitude at knocking down open threes under Archie Miller.  During his four seasons in Bloomington, the Hoosiers have made between 31.2% and 32.7% from beyond the arc, so this year’s stubborn waywardness is not an aberration.  Oddly, the current Hoosiers – so bad at shooting threes they are left undefended on the perimeter – is his most productive from deep.  They have ranked 307th, 311th, 204th, and 199th in Division One during that span – not exactly progress worth crowing about.

Compare those rankings with the Tom Crean led teams that immediately preceded Miller.  Those teams made 40% of their three-pointers and ranked 6th, 4th, and 48th, so the rims or shooting background at Assembly Hall are blameless.

The arc was moved back to the international distance of just over 22-feet before last season, but they did it for everyone – not just Indiana.  IU’s shooting accuracy actually increased with the change, so that had nothing to do with the failure to hit the target..

The reason we’ll skip talking about Indiana’s errant shooting is because their defense has caused opponents to be even worse.  Offenses have hit only 30.7% of their threes against IU, and the Hoosiers defense is ranked in the top 10 in efficiency for the first time since 2002.  We remember what happened in 2002, or I hope you do.

Yes, the Hoosiers are difficult to watch try to score.  There is no rhythm to the offense.  Players appear to be more concerned with not screwing up than making plays, and that’s no way to put the ball in the basket.  Because I got a B-minus in Finite Math while a student at IU, you should believe me when I tell you Indiana players will miss 100% of the shots they don’t take.  Of course, their percentage of makes goes up only slightly for the shots they do take, but that is beside the point.

It has been clear since Miller arrived in Bloomington that the defensive end was where his Hoosiers would hang their hat, and that means scoring will be at a premium.  Indiana fans who prize accurate shooting and crisp purposeful offensive movement will endure two hours of unending misery every time the Hoosiers lace up their Adidas.  If you are an astute fan of tough pack-line defense, this will be a team you enjoy.

Opposing defenses will double team Trayce Jackson-Davis and dare guards to launch disobedient scuds toward the rim from 23 feet.  Until Miller finds players who can both defend and shoot, they are doomed lose to teams capable of both.  And God help Indiana if they play another team like Texas with athleticism, length, defensive aggression, AND offensive efficiency.

There I go getting negative again.

Thursday night, IU gets a shot at the kind of team they would like to eventually become when they travel to Madison to play the Badgers.  Wisconsin is typically a team that defends and shoots well.  This season, they rank in college Basketball’s top 10 in offensive efficiency, defensive efficiency, and three-point percentage.  Greg Gard’s team is hard-nosed and experienced with four senior starters and another senior who is usually first off the bench.

Indiana has one senior playing any minutes at all, and a freshman, two sophomores, and a junior starting.  Thursday night will be a serious measuring stick for a program that needs to get old and stay old as quickly as possible.

For IU fans who woke up whining about a win against Maryland, what they see on Fox Sports One Thursday at 7p might make what happened last night seem like Mardi Gras, New Year’s Eve, and the first Saturday night of the fall semester all rolled into one.

Thursday night is going to be a stiff test for the Hoosiers and a fan base that hates poor shooting and losing to Wisconsin with equal enthusiasm.