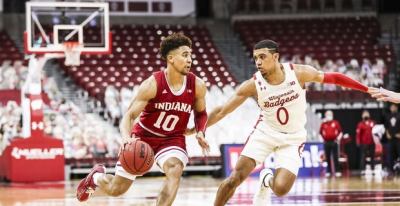 Rob Phinisee was good last night, and so were his teammates. Indiana lost anyway.

Indiana taking Wisconsin to two overtimes before succumbing to fatigue against a bunch of perpetual students in their mid-20s should be enough to sustain us as we continue to search for reasons to hope the Hoosiers are on the road to something more fruitful than battling for seventh in the Big 10.

Armaan Franklin missed the game with his sprained ankle, but Trayce Jackson-Davis stepped up big for the first 34 minutes of the game to give the Hoosiers a chance.  Before withering into fatigue-driven mediocrity, Jackson-Davis scored at will.  The future first team All-American did what he could for as long as he could, and if a foul had been called on his final drive to the basket at the end of regulation, we would be singing a different tune thins morning – but it wasn’t, so we aren’t.

Rob Phinisee and Al Durham also played well over the regulation length of a normal basketball game, and appeared to do everything they could for as long as they could.  Anthony Leal and Jerome Hunter balled out, made shots, and fought to the end.

Winning at Wisconsin is tough, and that’s the reason the Hoosiers have not enjoyed a happy flight home from Madison since Bob Knight was their coach and A.J. Guyton the point guard.  A win was there for the taking at the end of regulation and the first overtime, but IU couldn’t finish, so today we sing a familiar lament, “Oh, what might have been!”

It’s been a long time since Indiana fans celebrated what is rather than what was or what may be.  “Hey, look how close we got!” gets old.  So does, “If IU just keep improving, we have a chance to play in the NCAA Tournament!”  And, let’s not forget this oldie but goodie: “What is the buyout for (current coach’s name here)?”  More Indiana fans can recite the contractual status of their coach than the team’s record.

That’s Indiana Basketball in this utterly crappy decade (so far).  For God’s sake, there are Indiana fans who are pining on social for the halcyon days of Tom Crean – the preening, posing, and pacing leader of east coast recruits whose insanely complicated offense drove many fans nuts.  Hard to argue with two Big 10 championships when clearly Miller’s teams to this point haven’t been able to crack the upper half of conference standings.

But I’m right there as one who enjoyed watching last night as IU clawed its way to a six-point lead with six minutes left in the game.  Phinisee looked closer to what we believe his potential to be, and Leal seemed the kind of shooter Indiana desperately needs.  It’s easy this morning to see last night as a progression toward meaningful wins – instead of a feel-good loss that might not be held against Indiana by the NCAA Tournament Selection Committee..

The sad part about what made Indiana fans happy last night is that it’s hard to imagine this team playing harder or shooting better than they did through 45-minutes before the wheels fell off in the second overtime.  If they can’t play harder or better, then last night represents the closest IU can get to playing to their potential.  That means IU was as good as they can get.

Indiana used to be the class of the Big 10 – an annual National Championship contender.  Everyone inside and outside the program would like for that to be the case again, but there is no yellow brick road leading there.  Maybe what we watched last night is the best that can be hoped for, or maybe Indiana has another gear.

At some point, Indiana has to start winning games like that again.  Becoming a group of satisfied losers does not become IU Basketball fans.