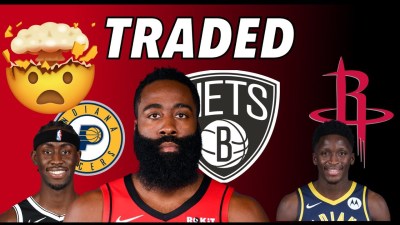 James Harden going to the Nets is the ESPN headline, but Oladipo for LeVert is much more interesting to Pacers fans!

If the Rockets were among the teams Victor Oladipo solicited while in the bubble playing for the Pacers, he got his wish.

Oladipo, who went from selfless hero to mirror-caressing diva with speed enough to impress Paul George, was dealt this afternoon to the Houston Rockets in a four-way deal that sent James Harden to the Brooklyn Nets and Caris LeVert back to the Pacers along with a second rounder.

LeVert is a fifth-year wing who has started roughly half the games he played since joining the Nets in a draft night deal that sent LeVert from the Pacers to the Nets in exchange for Thad Young.

If he can stay healthy, which has been a significant challenge for LeVert since his junior year at Michigan. LeVert is a solid wing who can get points, rebounds, and assists, averaging 18.5/4.3/6.0 while playing more than 27 minutes in al 12 Nets games.

Whether this deal is a great one for the Pacers comes down to whether they could have gotten a better return for Oladipo – a short-term asset for the Rockets with significant buy-in issues and the potential for never being the same player he was prior to tearing his quad tendon.  LeVert is a reasonable facsimile of Oladipo in several ways who belongs to the Pacers for two years beyond Oladipo’s best possible expiration date.  LeVert is on a team-friendly deal that will keep him in Indy for this season plus the next two at an average of $17.5M per.

Most troubling about Oladipo was his recent return to Chuckerville after taking an average of 19 shots to score 19 points over his last five games.  Victor the diva was never going to mesh on the floor with point guard Malcolm Brogdon, who has been the clear and obvious team leader since being acquired by the Pacers in a deal with the Bucks.

LeVert at his best is never going to be the equal of pre-injury Oladipo, but then again neither is Oladipo.

This is a deal the Pacers had to make if Oladipo was determined to bounce after the season – or try to extract max money out of the Pacers.  Time will tell whether it was the right deal at the right time, but in the moment it appears reasonable.

And given that Harden’s shots have to be taken be somebody as the Rockets completely unravel, Oladipo may find enhanced opportunities to go bombs away as he stat-stuffs toward a lucrative free agency.

Here is a very partial comp between Oladipo and LeVert for this brief regular season:

2 thoughts on “PACERS BLOCKBUSTER! Oladipo swapped for LeVert in their part of a four-way deal sending Harden to Nets”