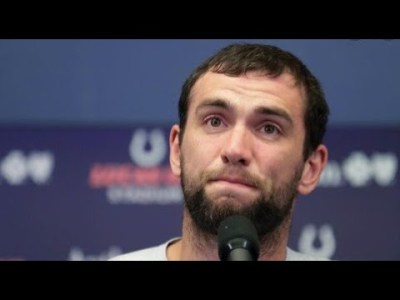 Andrew Luck retired and is not coming back. Jim Irsay answered a question about his yesterday, so we are required to discuss the idiocy of his possible return today.

Rock and roll icon Ian Hunter sang, “I said my, my, my, I’m once bitten twice, shy babe.”

Colts owner Jim Irsay loves music, so I’m trying to hit him where he lives because he said something about Andrew Luck yesterday in his media availability which was both generous and silly, “He knows how much we’d love to have him be our quarterback. There is just no question about that.”

That’s straight up crackers.  No way the Colts would welcome the chaos that Andrew Luck would bring with him into the franchise.  If you can get the talent and intellect without the reluctance to risk his health, of course Luck would be a great choice to lead the Colts back to Super Bowl contention.  Hell, without much around him, Luck went 11-5 three times and played in an AFC Championship.  He’s a top 10 quarterback if not for retirement.

But you can’t get Luck’s excellence without the risk that accompanies it.  If Luck decided – again – to bolt into retirement 15 days prior to the season opener, it would crush the franchise.  That call before the 2019 season cost the Colts dearly and forced general manager Chris Ballard to re-plate his plans to build a champion.  This offseason is as intriguing as it is because of that decision Luck made 18 months ago.  Those retirement ripples will continue to be felt for several more years.

To be fair, Irsay also said, “…I really think it kind of stands where it stands. Like I said before, Andrew (Luck) is retired and he knows we would love to have him back but only he could ever answer that question deep in his heart and his soul.”

Luck is retired, and he is going to stay retired because he has all the money he’s ever going to be able to spend, and the reasons he walked away are still 100% valid.  Embracing the constant torment and darkness of injury and rehab is not worth the return.  Raising his daughter and being a loving and present husband demanded that he walk away.  it still demands it.

The timing of Luck’s decision was horrifyingly bad, but forgoing the risk posed by 300 pound men launching into his torso is utterly sane.  We can debate the appropriateness of Luck accepting $25-million to not go to work, but the call to walk away while he could makes plenty of sense.

Irsay’s kindness in saying the door is always open is only excused by the knowledge that Luck will never walk through it.

If Luck ever took Irsay up on that invitation, it would be managerial malpractice to allow it.  Opening the franchise up to the same level of chaos he caused by walking away the first time would be irresponsible in the extreme.

We wish Luck peace and joy as he enjoys retirement during a phase of life where most are just giving birth to a career.

Luck’s life will go on without the Colts, and the Colts have already gone on without Luck.  That’s the way it will – and should – stay.

Once bitten, twice shy, the Colts should remain.