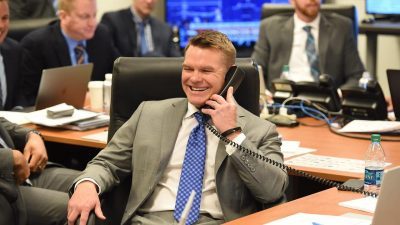 Will Chris Ballard be smiling when the deal gets done to bring the next starting quarterback to Indianapolis?

Bidding against short-timers is a fool’s errand, so the Colts versus Bears in a duel to trade for a starting quarterback is a rigged game.

This isn’t news to Colts general manager Chris Ballard and his staff, but as fans try to decide the best path forward as their favorite team searches again for a starting quarterback after Philip Rivers retirement, it might help recalibrate expectations.

The reality is that the Bears will get who they target because both GM Ryan Pace and coach Matt Nagy are future former employees who who be fired next offseason if they don’t find the right answer for the position that has been so elusive for generations in the Windy City.

Jay Cutler is the longest tenured starter in Bears history going back to Sid Luckman, if you need a salient example of how poorly they have chosen quarterbacks.

Because of their tenuous status, neither Pace nor Nagy will be terribly concerned about offering first rounders in 2022 and 2023 in exchange for a QB with a chance to win at a higher level in 2021 than Mitch Trubisky or Nick Foles.  The Colts will be conversely cautious in mortgaging future draft equity.

This is a bit like bidding against Colts owner Jim Irsay for rock ‘n’ roll memorabilia.  If Irsay wants the guitar David Gilmour played while recording Dark Side of the Moon, you are out of luck.  Irsay is just going to bid until you pass out.  With a virtually bottomless wallet, he has no ceiling to respect.  Pace will be offering draft loot that he would never use anyway to get a quarterback who might save his ass.

Whether the Colts are in the game for Carson Wentz is entirely dependent upon the Bears targeting someone else.  If they like Deshawn Watson and the Texans are dopey enough to offer him to the Bears, then Wentz might be gotten by the Colts for fair value.  The Texans, as dumb as they are on occasion, would never deal an elite level QB within their own division, so that option is off the table for Ballard.

If the Bears covet Wentz, as Irsay coveted Gilmour’s guitar, they will get him.  Chicagoans will remember former Cubs GM Jim Hendry doing exactly the same thing in moronic deals that sent virtually the entire farm system elsewhere for a series of rag arms like Matt Garza and Rich Harden.

Hendry knew he was in trouble unless winning commenced immediately.  Why would he care what Chris Archer or Josh Donaldson would become in a year or two.  The Rays and A’s benefitted from Hendry’s indifference to long-term success.  The Eagles or Texans could find themselves in the same position.

There is one small advantage the Colts have over the Bears – cap space.  Ballard has almost $80M to play with, which is more than enough to accommodate Wentz’s bloated deal.  The Bears are already at the expected cap for 2021.  That means Pace would have to ship contracts to the Eagles – or Texans – to complete a deal.  Or they would have to trim the roster.  That might make things too messy to make a deal work for either side.

For the Colts to execute their plan to fill the most important position in team sports, they are going to have to wait for the Bears to make their play.  As galling as that may sound to Colts fans, they should be comforted by the Bears almost uninterrupted 70-year history of making the wrong choice at QB.

Will the Colts wind up with Wentz, Sam Darnold, or deal to move up into the top 10 of the draft for a prospect like Trey Lance?  Who knows?  Will the Bears ship draft picks and current talent to Philly or Houston?  We don’t know that either.

That’s what makes the NFL’s offseason almost as much fun as the regular season.