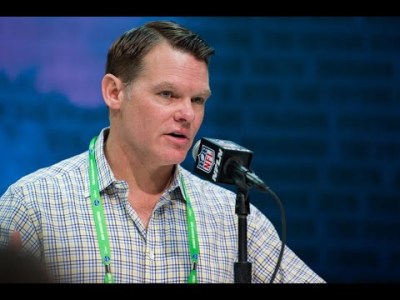 We won’t get a chance to ask Chris Ballard a bunch of questions at the NFL Combine, but that doesn’t keep us from evaluating his work!

At some point, what we assess as excellent drafts will have to net playoff wins, but there is no denying that the selections made by GM Chris Ballard and his staff in the 2020 NFL Draft were critical in lifting the team back into he postseason for the first time since Andrew Luck’s retirement.

Ballard makes a lot of moves within a draft – and from draft to draft – so applying a grade to his work is never as simple as looking at the players acquired and determining their value.  For instance, DeForest Buckner was not drafted, but he was acquired in a trade with the 49ers for the Colts first round pick at #13 and then signed to a contract extension.  Including him as part of this class makes sense.

Michael Pittman Jr. was drafted 34th, but that selection was acquired when Ballard traded out of the first round of the 2019 draft.  He netted the pick used to grab Pittman as well as the 46th pick of the 2019 draft (which was then dealt to net Ben Banogu at #49 and the fifth rounder that was used on Marvell Tell).  So do we apply Pittman to the 2019 or 2020 draft?

For simplicity and accuracy, I’m going to count Buckner and Pittman as a part of this draft.  Because of that, the 2020 haul for the Colts is quite impressive, putting the Colts in the playoffs with an aging quarterback who led the Chargers to a 5-11 record the year before.

It’s not often need syncs with availability this neatly.  The Colts craved a three-technique who could dominate the middle of the line, and Buckner proved himself to be in a class just behind Aaron Donald in that spot.  Getting a player of Buckner’s quality with the 13th pick would be a tough task.  The 49ers traded down a spot to 14 with Tampa and took Javon Kinlaw, a defensive tackle who did not come close to Buckner’s productivity as a rookie.  Maybe he pops in his second or third year, but Buckner was a much better player in 2020.  At 26, Buckner’s best may be ahead of him.

As we discussed, Pittman is part of the bounty the Colts reaped for swapping the 26th pick of the 2019 draft with WFT.  Montez Sweat was taken by WFT with that pick, and the Colts wound up with Ben Banogu and Pittman.  Sweat has totaled 16 sacks in two seasons, while Banogu has yet to fully develop.  Pittman had a productive 2020.  In 13 games, Pittman caught 40 passes for 503 yards.  Those numbers aren’t eye-popping, but he should see growth as a sophomore.

After starting slowly, averaging 36.4 yards in his first nine games, Taylor exploded for a 123.5 yards per game average over his last six.  Taylor is clearly the back of the future for the Colts offense – a group that likes balance between running and passing.  It might have been better for Taylor to play behind Marlon Mack for a season, but Mack’s torn Achilles mandated an acceleration in his development.  If the 2020 draft was relitigated, there is no doubt Taylor would go in the first round.

Similar to Taylor, Blackmon was expected to work as a backup for Malik Hooker, before Hooker tore his Achilles.  Blackmon stepped in without much training camp as he rehabbed his surgically repaired ACL and played very well initially before fading a bit late in the season.  He projects as a starter in 2021 and beyond.  That’s solid return for a late third rounder.

This pick is impossible to assess, given Eason’s lack of work as a third-stringer behind Philip Rivers and Jacoby Brissett.  If Eason can become a trusted backup to Carson Wentz, that would be a great result for a fourth round pick. After watching hing Eason through camp, I loved him.  He missed one throw that I saw, has all the measurables minus foot speed, and is said to be a tireless worker.  We’ll see.

The overall health of the interior of the offensive line kept us from seeing what Pinter might be moving forward.  According to the coaching staff and Ballard, the Colts love the Ball State product.  Offensive line depth will surely be tested at some point moving forward, and Pinter will have a chance to validate that trust.

The Penn State grad played in two games, making two tackles.  Who knows what he will or won’t be?  Maybe he develops as Grover Stewart has.  Maybe not.

Rodgers was a dynamic kickoff returner for the Colts, averaging 28.8 yards per return – taking one to the house against the Browns.  A sixth rounder who gives you points is a net win whether he ever shows as a CB or not.

Was on the field for two snaps.

Glasgow is a special teams guy, and a very good one.  He made nine tackles on kick coverage, making him a bargain given his draft slot.  Teams need crazy from a sixth round special teamer, and Glasgow sure seemed high strung as he shedded blockers.

Frankly, I’m getting a little tired of blowing kisses to Chris Ballard, but what else can I do?  In the aggregate, this draft class grades as an A-.  There is not a clunker in the bunch – yet.  Among the nine players acquired, six contributed heavily to the Colts return to relevance.  This class, combined with the incredible haul from 2018, has built a foundation of talent and a culture of toughness that may result in the Colts finding a way to the next level of the postseason.

One thought on “Indianapolis Colts – grading the 2020 Draft, another honor roll effort by Chris Ballard”