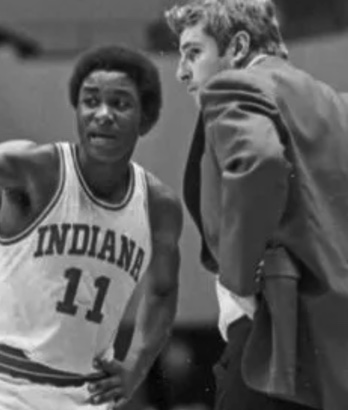 When Isiah Thomas and Bob Knight found a rhythm in 1981, so did the Hoosiers as they won an NCAA Championship.

Why do I watch every Indiana game from start to finish?

Indiana fans are among the most ardent in college basketball.  After a monotonous and historic run of mediocre basketball, Hoosiers still block out two-plus hours of their lives to watch.  No matter the opponent, stakes, or apparent level of futility, we still show up wearing red and while – even alone in our homes.

The question of why I keep coming back has echoed in my head for years.  Through the meager Tom Crean years at the beginning of the rebuild he directed through its inevitable demise, and now during four hopeless years under Archie Miller, I continue to show up to see if they make the changes to become a competent unit.

It’s rare that I am pleased with the style or effort during an IU game.  Maybe I enjoyed the Florida State game (a loss) because it seemed the team had finally decided to embrace the necessity of everyone energetically working in harmony.

My love for Indiana Basketball dates back to my freshman year in Bloomington when the Hoosiers evolved from a very ordinary team with a 7-5 record to become a relentless storm of pure basketball excellence during a dominant NCAA Tournament run that ended with a 63-50 win over North Carolina.

The difference between a disjointed roster and coach and one that played with total unanimity of purpose was there for anyone to see during that season.  early in the season, Bob Knight fought with Isiah Thomas over style of play, and Landon Turner had great talent but none of the energy needed to unlock it.

Then the switch flipped.

Knight turned Isiah loose and Ray Tolbert, among others, compelled Turner to explode as one of the country’s best players.  Suddenly, the team that was so easily beaten in December became an impossible to contend with juggernaut in February and March.  It was right there in front of us as I lived in the glow of Assembly Hall right across 17th Street in Briscoe Quad.

When people look at the game by game results of the 1981 Hoosiers, they see nine losses and conclude this was an OK team that got hot at the right time.  That wasn’t the thing at all.  Indiana evolved from a collection of disparate parts clunking across the Assembly Hall floor into a finely tuned instrument of winning basketball.  Every possession was a well-executed masterclass, and opponents wilted under the pressure of matching IU’s near perfection.

It was during that run 40 years ago as potential and reality merged that I fell in love with Indiana Basketball.  The possibility of seeing it again has kept me coming back through more than 1,000 games.  The Hoosiers have never approached the beauty of that 1981 team, but there have been nibbles toward it in 1987, 1992, 1993, 2002, and 2013.

So I keep watching in the hopes that whomever the coach is can get players to buy into the majesty of basketball played by those with an unshakeable commitment to the game and each other.

Often coaches believe it is up to them to outsmart their opponent, but true leaders are committed to binding talented players as a whole to form one heart and one mind.  Great basketball is like jazz – if great talents embrace a common rhythm and melody, a transcendent moment occurs for players and its audience.  If talented musicians each try to take for themselves rather than give to the whole, the music breaks down into a hideous cacophony.

Indiana Basketball has not made beautiful music for a long time, and I’m not sure Miller is the conductor to compel its creation – or the understanding of the sacrifices that cause it.

The 1981 Indiana team had raw talent, devotion to one other, and a selfless leadership to attain the highest form of the game I have ever seen.  They took fans on a unique goosepimply ride to a championship. That’s why I come back.  I want that ride again.

It’s not likely to happen tomorrow against Rutgers, but I will watch because…you never know.

11 thoughts on “Indiana Basketball – why do IU fans torture themselves by continuing to watch?”