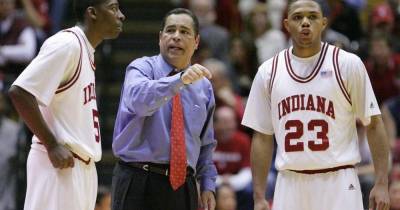 Last year, a former Indiana coach made his long awaited return to Assembly Hall.  The echoes of the loving cheers are still bouncing off the walls.  Another former coach will return this Friday.  If fans were allowed in the building, the noise would be as loud, but the tone quite different.

You can question the NCAA Tournament Selection Committee’s decision to leave Louisville off its bracket of 68 teams, but never doubt its sense of humor.

As if IU fans didn’t already have a heaping helping of woe on their plate, that august committee slotted former Indiana coach Kelvin Sampson and his two-seed Houston Cougars in Bloomington for a first round NCAA Tournament game against Cleveland State this Friday.

What a shame Indiana University has decided not to allow fans inside Assembly Hall for this weekend’s first round games.  An opportunity this perfect to vent so rarely comes along.

We’ve all heard the Jerry Tarkanian quote, “The NCAA is so mad at Kentucky they’re going to give Cleveland State another year of probation.”  How about a mutation of that quote to, ‘IU fans are so pissed off at Archie Miller, they booed Kelvin Sampson off the floor.’

That’s what could have happened to Sampson – whose indifference to NCAA rules he had already violated at Oklahoma sent the Hoosiers into a 2008 tailspin that prompted an NCAA exile that lasted five years.

If Archie Miller is unloved by the Hoosier faithful, Sampson remains loathed at IU with extreme bitterness.  Not only did Sampson in his arrogance break silly rules that no longer exist, (not a reason to exonerate him by the way), he invited a crew of bad actors to town that poorly represented the Indiana Basketball brand established by Quinn Buckner, Ray Tolbert, Keith Smart, and Alan Henderson.

Sampson’s brief interlude of amorality in Bloomington is the Hoosiers’ low point of the last 20 years, and that is saying something, especially given their own current five-year sabbatical from the NCAA Tournament.

Too bad fans won’t be able to remind Sampson of their disdain, and cleanse their emotional palette.

The only thing more perfect would have been for Sampson to be paired against former IU assistant Rob Senderoff’s Kent State team.