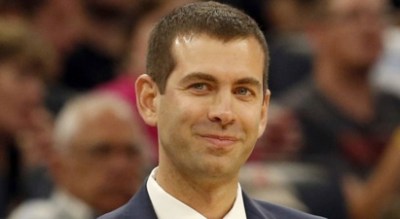 Yep.  Indiana basketball fans are turning into those fans – the kind that examine every word in a quote to try to find a hint of truth as the search for a new coach is underway.

Indiana fired Archie Miller Monday, and during the last 48 hours the smoke signals that wafted our way for three weeks that Brad Stevens might be the next head coach have exploded into an all-consuming conflagration.

The fire of interest in Brad and his interest in returning to the state he still refers to as home burns like the inferno that destroyed the north side of Chicago in 1871 after Mrs. O’Leary’s cow kicked over a lantern.

But this fire won’t destroy a city or us – it only serves to warm the hearts of Indiana fans who have been waiting patiently (kind of) for any hint of hope that a return to relevance in college basketball is coming.

When asked prior to last night’s Celtics vs. Jazz game about interest in his accepting the IU job, here is what Stevens said:

“It means a lot.  It means a lot. I know that … listen, I’ve got a lot of friends back there. I’ve got a lot of people that are really important to me there. My dad’s still there. That does mean a lot. I won’t act like that doesn’t. Like I said earlier today, it’s flattering.  But I also realize that I’m the coach of the Celtics and that’s — it’s been an amazing opportunity, an amazing challenge every day for the last eight years and I’m extremely grateful for that.”

Okay.  Does that sound like a guy closing the door on the idea of returning to Indiana to lead the Hoosiers?  Correcting himself from “that’s” to “it’s been” in talking about the “amazing opportunity” with the Celtics tells us something, right?  it’s not like Brad is some verbal oaf who is baffled by the vagaries of verb tenses.  “It’s been” is past – as in maybe Brad is ready for a different amazing opportunity or challenge.

Until I watched him say those things last night, I viewed the possibility of Brad coming to Indiana as a huge long shot – a pipe dream that might keep us engaged in athletic director Scott Dolson’s search for the next coach until some other coach was introduced to great fanfare and yammering about home runs and championships.

After watching Brad wax rhapsodic about Indiana and the meaning of the state to him and his family, my feeling was transformed from “wouldn’t it be nice if Brad came home?” to “It will be nice when Brad comes home.”  See how important verb tenses are in conveying a thought?

Does that change in phrasing mean it’s a sure thing that Brad will leave the Celtics after the season to lead Indiana Basketball?  Of course not.  But instead of this being some kind of ethereal dream – like me playing shortstop for the Cubs, it’s now more attainable, like maybe one day I’ll own a boat.

Last night, Brad Stevens walking out of the tunnel at Simon Skjodt Assembly Hall became an image that is not farfetched all – not like it was before he described coaching the Celtics as a part of his past.

2 thoughts on “Indiana Basketball – Did Brad Stevens really refer to himself as Celtics coach in the past tense?”