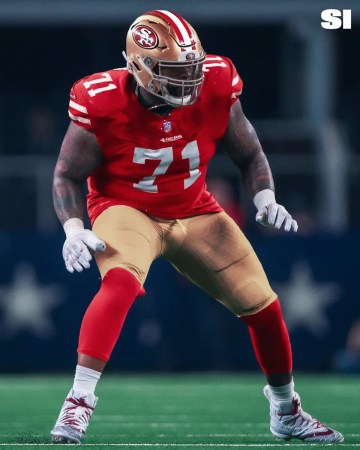 Trent Williams is staying with the 49ers, so Chris Ballard will have to find a different left tackle to protect Carson Wentz.

Trent Williams has signed an extremely lucrative deal to remain the left tackle for the San Francisco 49ers, so that free agent option is off the table for the Indianapolis Colts.

And that is a very good thing.

Even with the $46 million general manager Chris Ballard has at his discretion, lavishing the extreme wealth the 49ers are investing in the soon-to-be 33-year-old Williams was never an option.  The deal is worth $138 million over six years with $55 million guaranteed.

Williams would have been a wonderful security blanket for incoming Colts quarterback Carson Wentz, but $23M per year through Williams’ age 38 season would have caused more problems than it solved.  The Colts need a left tackle they can trust, but not at one-eighth of their salary cap!

In need of a left tackle, and upgrades at edge, receiver, cornerback, and linebacker, Colts fans see the quiet on 56th Street and get nervous.  They should remember Ballard is usually a slow play master when it comes to acquiring free agents.  Dumb money spends early in NFL free agency, and the draft will plug some of those holes too.

Spending a big bucket of cash on a difference maker is something Ballard is not averse to.  Last year, the Colts threw $25 million at Philip Rivers to lift them into the playoffs.  He also dealt a first rounder to the 49ers for defensive tackle DeForest Buckner, and then gave him a huge extension.

It’s not that Ballard won’t spend, but that he refuses to squander.  That should make fans happy, not nervous.  His prudence is the primary reason the Colts have $46 million in their pocket to throw at upgrades or internal contract extensions.

Look for Ballard to wait for the rubes to stop throwing cash around.  Spending $10 million on a mediocre and fading quarterback like Andy Dalton is exactly the kind of move Colts should be thrilled Ballard avoided.

Cash is scarce with a salary cap reduction, and there will be high quality players still on the shelf  once the dumb money is exhausted.

Williams would have looked very nice in a Colts uniform, but not for that kind of jack.  Instead of watching the action with envy, fans should enjoy the quiet knowing that if dumb money spends early – smart money spends late.

Sometimes the best deals are those unmade.

Judge the offseason when camp opens.  Any energy toward angst prior to that is wasted.