Mike Woodson as Indiana’s new coach is an atypical choice, and for that reason I love it!

The last three times Indiana went about the task of finding the new best hope to bring Indiana back to consistent success, a coach was chosen from outside a fairly robust group of former Hoosiers.  Not this time. 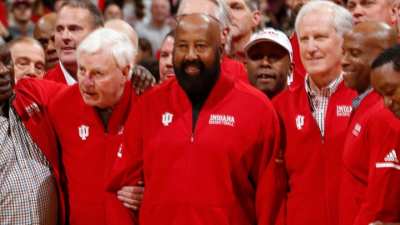 Feels like Indiana has returned to some very successful roots by hiring Mike Woodson as its next head coach. Today marks the first time I haven’t had to talk myself into being pleased with an Indiana Basketball hire.

In 2006, Kelvin Sampson was hired by athletic director Rick Greenspan and president Adam Herbert.  There was very little about him that screamed Indiana.  He was a good coach, as he showed at Oklahoma prior to coming to IU, and is again at Elite Eight bound Houston.  He was a win at all costs coach leading a win the right way program.  The ill fit was apparent immediately and less than two years later he was fired.

Next up was Greenspan’s second swing at hiring the right guy.  He came up with Tom Crean from Marquette, who brought boundless energy to the job of rebuilding from the ruins left by Sampson.  For five years, the fit was awkward, but the results constantly improved, so Indiana fans looked the other way until Crean’s energy began to wear on the right people in the wrong way.

Crean’s replacement was Archie Miller from the successful program at Dayton.  He never seemed to embrace Indiana as a state or university, and projected a churlish countenance from his first day to the last.  Given the failure of Indiana to post a winning Big 10 record during any of his four seasons, smiling would have been an odd choice – either for Miller or Indiana fans.

Had new athletic director Scott Dolson trundled down the same path to hire a coach who demonstrated great fit elsewhere – like Loyola’s Porter Moser, Baylor’s Scott Drew, or Texas Tech’s Chris Beard, it would have been difficult to see it as anything other than hiring a fourth straight resume’ rather than a coach specifically suited to be Indiana’s coach.

Woodson was raised in Indianapolis, graduated from Broad Ripple High School, starred at Indiana where he scored more than 2,000 points, and played 11 years in the NBA before becoming a successful head coach with the Atlanta Hawks and New York Knicks.

My glee over Woodson being hired is not accompanied by dreams of Indiana winning the 2022 national championship.  I have no expectation for the program right now, but the idea that Indiana is going to be led by coach who appreciates the cultural attributes that have always made Indiana special makes me bullish for the future.

It’s also a very positive step that Indiana chose a black man to lead its signature program.  It’s not that IU has never been led by a black man.  It has.  Mike Davis spent six years as IU’s coach, but he was forced upon the school by players furious over Bob Knight’s dismissal.  Woodson was chosen by Dolson from a menu of candidates.  There’s a more than subtle difference there.

The question of whether Woodson will be an adept recruiter, talent developer, and game manager will be answered over the next four or five years.  But the joy of an IU grad coming back to his alma mater to lead the Hoosiers should make fans feel good for the rest of the offseason.

Job #1 for Woodson is to evaluate the players who have entered their names in the transfer portal.  Who among them who he like to retain and which would he like to replace?  Then get those he would like to return to embrace that opportunity.

Job #2 is to win basketball games through toughness, execution, and talent without sacrificing academics or compliance.

As for Woodson’s age (63), I think it’s a plus.  Not only has Woodson seen it all, he has a ticking clock.  While he’s not too old to handle a 14-hour daily grind, he’s also not looking to build a 20-year legacy at IU.  He wants to win sooner rather than later because later is coming more quickly for Woodson than most.

One more thing – congratulations to Dolson for having the guts to make a hire that is going to baffle many within the fanbase and among the national media.  The road less traveled can be lonely, but Dolson embraces that trek with this hire.  And congratulations to Woodson for deciding to embrace a new challenge at a university he loves.

We’ll see if it pays off.