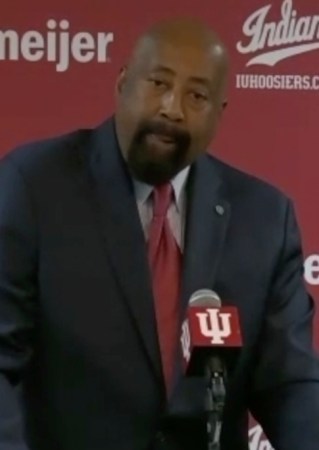 Does this look like a man who is telling you the truth? Damn right it is.

The event announcing the hire of Mike Woodson as the 30th basketball coach in Indiana University history was not designed to win over fans and media like the previous two.

There were no bands, fireworks, or bold predictions.  Red carpets, frenzied applause, or inspirational videos were also absent.

Maybe the lack of dynamism was due to it being held via Zoom, and the only people in the room were the participants – plus Thad Matta, friends, and family – none of whom spoke.  It’s hard to crank up energy in an empty room.  Or maybe it was because both athletic director Scott Dolson and Woodson were hired for reasons other than their ability to captivate.

Four years ago, on the floor at Simon Skjodt Assembly Hall new coach Archie Miller and athletic director Fred Glass spoke of championships and how Miller’s arrival at IU represented more than a home run.  Glass called it a grand slam.  Nine years prior, Tom Crean won the press conference with an energetic speech about his decision to coach at one of the great programs in the history of college hoops.

This one was low key – really low key – low key to the point of being a quaint throwback to the way things worked before the show became more important than the results.

And I loved it because it seems Indiana has finally figured out that winning press conferences is not the point.  Winning basketball games in bulk does not require promises of winning basketball games in bulk.  Winning requires hard work, accountability, recruiting to a culture, and the ability to shoot.  These virtues were mentioned multiple times by Woodson, who seemed genuinely moved by the timing that allowed him the opportunity to coach at his alma mater.

Woodson said job one is to try to communicate the wisdom of remaining with the program to the six players who asked to have their names listed in the NCAA Transfer Portal following Millers firing.  Armaan Franklin, Race Thompson, Khristian Lander, and Jordan Geronimo project as key contributors next year, and Woodson said he is not above pleading for them to stick around.

If they do, Woodson’s task of filling the roster will be relatively simple.  It appeared Al Durham and Parker Stewart were leaving for reasons other than coaching uncertainty, so that would give Woodson three spots available for recruits or transfers if Joey Brunk doesn’t exercise his right to come back after a back injury robbed him of a final season in Bloomington.

And I have to tell you that I 100% believe what Woodson is trying to build will get the attention of recruits.  When he speaks of building a family, it seems like more than lip service.  When you listen to interviews with his former players from the Atlanta Hawks and New York Knicks, they speak of the family Woodson tried to build.  There is tough love with Woodson, but tough love is sometimes the best love.

What Woodson said again and again is that he is committed to helping student-athletes reach their potential on and off the court.  He didn’t perform the words like at $50,000 an hour public speaker, but he appeared to be oozing with sincerity.  Woodson may not get players to run through walls or recruits to commit based upon a jolt of electricity generated by his boundless charisma, but there was a palpable veracity to his remarks today that will compel action.

I believed him, and I wished as I listened that my son might have had the opportunity to play for him – because he is real.  In a profession where snake oil salesman abound and commitments are won with cash-filled envelopes, it seems Woodson is going to try to win at Indiana by creating a great environment for the development of players and people.

Go figure, a coach trying to attract players by promising what he can actually deliver without breaking a bunch of rules and laws.  Can something that antiquated actually work?

It worked in the 1970s, 1980s, and 1990s.  Mike Woodson is proof that such an arcane ideology can produce quality adults who go on to prosper in a difficult business.  We’ll see if current players and future recruits have the bandwidth to see today’s performance as a reason to pledge IU instead of sleeping through an hour without a single 15-second moment worth chronicling on TikTok?