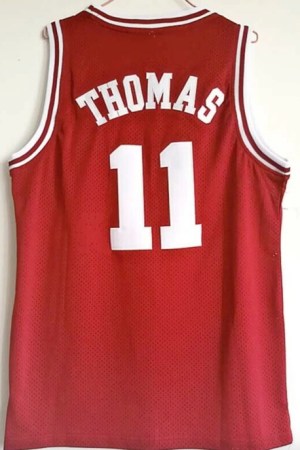 How does this Isiah Thomas jersey look to you?

There are few things less important in life than the debate over whether names belong on the backs of Indiana Basketball jerseys, but the topic is raging again because of the inevitability players will soon be able to profit from their names, images, and likenesses.

Names on the backs of jerseys with enhance name recognition of basketball players, according to advocates for adding names.  Detractors cite tradition and the need to play for the name on the front of the jersey.

As a practical matter, there is no correlation between on court success and the name being sewn onto an area of a jersey impossible for the player wearing it to see.  If there was an inkling of proof a name helped a shooter make one more shot or snare one more rebound, I would would lead the charge for names.  There isn’t so – again – my emotional investment hovers at zero.

Indiana Basketball has replaced Archie Miller with Mike Woodson, lost three transfers, and added two transfers and two recruits.  Woodson is 63 and has never coached in college.  The team is entirely unproven, coming off a miserable 12-15 season, and fans and media are debating whether names should be affixed to the backs of jerseys?

If you need proof IU fans are insane, this argument serves as Exhibit A.

I have long been a traditionalist in terms of uniforms.  Change is usually driven by greed, and greed is repulsive.  Names on the backs of Cubs jerseys, particularly those that commemorate players from the 1960s and 1970s like Ernie Banks and Ron Santo are particularly silly because Santo and Banks never had names on their jerseys.

That stands as pretty good evidence that names on jerseys are of little branding value.  Banks and Santo are beloved as Cubs greats just as Isiah Thomas, Steve Alford, Calbert Cheaney, Victor Oladipo, and Jordan Hulls are among IU greats.  We know there names because of what they did on the court.  They would be no more famous had they worn their names over their numbers.

The only compelling argument I have heard in favor of names on jerseys comes from parents who are proud to see their names on their sons’ jerseys.  But if we allow parents to determine any course of athletic department policy – all is lost.  They are all irretrievably nuts.

When my son played at Loyola of Chicago, I was proud that his work ethic had given him the opportunity to play college basketball.  His name on the jersey meant nothing.  I was still a crazy parent, just not in that specific way.

After watching IU miss enough free throws to cost IU at least three losses and Miller his job, the last thing on my mind is whether Indiana put names on the backs of student-athletes.  Members of a teamdthat has failed to qualify for the NCAA Tournament for five straight years,  must have more important issues to occupy their minds than the style of jerseys with or without names.

To their credit, I have never heard an IU player campaign for names on jerseys.  At least I never paid attention to them if they did.  When your team ranks 300th in free throw percentage (as IU did in 2020-2021), you keep your mouth shut, work hard, and work to turn this historic program around.