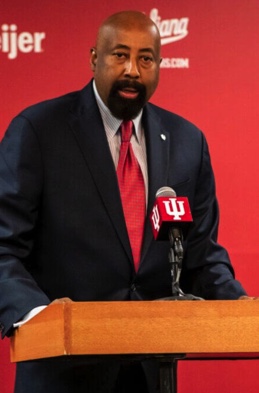 Mike Woodson is the answer to IU fans’ dreams. He is an Indiana player coming back to Indiana to coach

Indiana Basketball fans are living in a dream world where everything is just the way it should be, and none of us wants to wake up.

At least once a week there is great news about the direction of the program.  First, the firing of Archie Miller was celebrated because he was clearly a bad fit and had the lack of NCAA Tournament invitations to prove it.  Some wonderful donor coughed up the cash to buyout Miller’s contract, and the boil was finally lanced.

Next came word that athletic director Scott Dolson was preparing a monster offer to lure Brad Stevens away from the Boston Celtics.  Brad was able to lead Butler to back-to-back national championship games, grew up an IU fan, and played at Zionsville High School and DePauw University.  He was the perfect fit, except for the fact he did not want the job.  That was fine because the next piece of news was that IU legend Mike Woodson was Plan B.

Woodson scored more than 2,000 points for Bob Knight, maintained a great relationship with his mentor, and is an Indiana native who attended Broad Ripple High School.  He also played and coached in the NBA for most of the past 40 years.  He understands the modern player while also demanding consistent effort.  he was seen immediately as the perfect hire because that belief was a lot more fun than assuming the opposite – again.

Shortly after Woodson unpacked, All-American Trayce Jackson-Davis announced he would remain in Bloomington for his junior season.  Teammates followed suit, although Armaan Franklin, Al Durham, and Joey Brunk decided to transfer.  Woodson locked down five-star recruit Tamar Bates, who was recently released from his National Letter of Intent to attend Texas.  Pitt transfer Xavier Johnson pledged, and was followed yesterday by Michael Durr – a seven-footer who had a cup of coffee at Virginia Tech after transferring from South Florida.

Shortly after Woodson was hired, Indiana alum and fan favorite Dane Fife was hired away from Tom Izzo and Michigan State.  Fife has long been viewed as a very acceptable head coach candidate with a strong tether to the Knight era.

Last week, junior Jerome Hunter was asked to vacate the premises.  IU fans used to call that “Creaning,” and when namesake Tom ran the program, it was frowned upon.  Now that Woodson is the coach, fans see it as a return to Indiana-level discipline.  “Set expectations, enforce expectations, issue meaningful consequences,” is the Indiana way!

We don’t know exactly what happened with Hunter, who was briefly suspended in early February for what at the time was described by Miller as a lack of focus.  Fans see Hunter’s ouster as a sign that the dog is again wagging the tail in Bloomington, rather than the other way around.

Of course, we don’t know if any of these changes will result in a single additional win, and while no one weeps for Miller, he is likely not the wretched leader he is painted to be compared to Woodson, who has yet to lead a college team to a single win.  We should also remember he has yet to lose a single game either.

Hey, I’m as over the moon as anyone as we discuss IU Basketball’s future under Woodson.  Johnson and Bates are going to be All-Americans, Jackson-Davis will be the Big 10 Player of the Year, and Woodson will remind everyone of all the good Knight brought to IU without any of the self-indulgent baggage.

Indiana fans are so starved for a reason to hope that every single change over the past two months, including Miller being told to pack a box has been viewed as a reason to place a bulk order for banner fabric.

I keep trying to tell myself to slow my roll, take a deep breath, and allow Woodson to take the time needed to rebuild a program dormant for the majority of the past 20 seasons, but I refuse to listen.

Like thousands of other Indiana fans, I am having way too much fun.  Reality will assert itself soon enough.  Why hurry it along?

One thought on “Hope has come to Bloomington with Mike Woodson, and I can’t help but buy in!”