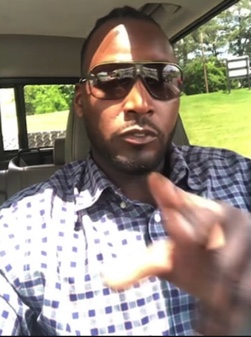 Kwame Brown has figured out how sports media works – insanity plays, for a while.

There is nothing quite like untethered lunacy on social media, and Kwame Brown – the #1 pick of the 2001 NBA Draft – is giving us a bunch of it this week on his Instagram and YouTube feeds.

Brown evidently has had enough of being belittled as the poster boy for draft busts in the media, and is engaging with those who have the temerity to diss him publicly.

Despite a relatively lackluster 12-year career, Brown was able to cobble together $64 million in income.  Responsibly managed, that kind of cabbage buys a lot of things – cars, homes, free time, and a life without oversight.

Minus a boss, there is no immediate consequence for profane vitriol, so Brown can go on his various feeds at his leisure to scream the n-word and threaten media personalities and former players with violence.  No one has given Brown a moment’s thought in the eight years since his basketball career ended – until this week when he went off the rails.

While there is no question his choice of words is suspect, there is a raw honesty to his societal critiques that rings a significant bell.  That ringing is drawing eyes, ears, and clicks.  I just finished watching Kwame live on YouTube along with 4,000 others.  Be the end of the day, that number will likely top 100K – roughly 40% of the viewers for a good day on ESPN’s Get UP!

That’s the way our media society works these days.  Outrage is fun to watch.  Kwame going haywire and threatening to slap ESPN’s Stephen A. Smith is very tasty eye candy.

But here is what will happen.  Because Brown is suddenly being watched, someone is going to offer him money to work for their company.  Then he will have a boss who doesn’t want to be held responsible for aberrant behavior and potentially actionable rants.  There will be a meeting where Brown is told to back off the threats and habitual n-word use.  People will stop watching because he will evolve into a clone of every other non-offensive former player who wants fat media cash.

That’s the sports media cycle of life, and Brown is about to take a short spin on that merry-go-round.

One thought on “Kwame Brown goes on the attack and turns his formerly modest IG and YT feeds into click farms!”