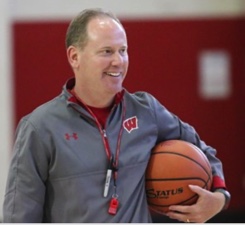 Greg Gard is not smiling today, and he will be on guard for the rest of his career because of an act of reckless immaturity.

When college students believe they understand more about life than adults with real responsibilities, mistakes are made.  Learning from those mistakes is how children become adults.

So it was in Madison when someone privy to a February meeting between Wisconsin Basketball coach Greg Gard and the seniors from his team surreptitiously recorded the proceedings and leaked them to the Wisconsin State Journal.

The edited recording revealed an airing of grievances by the seniors and some responses from Gard, and all of it should have remained within the confines of the room where it was held.

It’s difficult to provide for your family based upon the ability to compel student-athletes to compete at the highest level.  Some players yearn for a father-figure, others covet a simple tactician, more yearn for NBA millions, and a larger-than-you-would-guess slice want to go to college for free in exchange for the least acceptable level of effort expended.

Wisconsin has won consistently over the past two decades because Gard, Bo Ryan, and Dick Bennett recruited young men who care enough about their game to fully develop it, and then play for each other and their coach at a level requiring a familial level of trust.

When the seniors spoke honestly about the concerns they had about Gard’s level of leadership and the way it affected their ability to compete, they had an expectation of trust.  When Gard agreed to the meeting, he had a similar expectation.  That trust was irrevocably broken when the meeting was recorded and then it was set ablaze when it was emailed to a reporter.

Complete trust that what is said in a locker room (or conference room) will stay within that room are now gone.  That means that complete honesty is likely gone as well – at least for the prudent coaches who want to keep their jobs.

Every coach will now have to vet every utterance through the filter of those third parties who may hear him or her at some point after a disgruntled player opts to make them public.

I’m sure the leaker feels he did the right thing by sharing the edited version of the meeting – that somehow he served future Badgers by forcing Gard to adjust his message and leadership style.  What actually happened will change Gard, the Badger program, and the development of student-athletes as human beings for the worse – and forever.

No human being is perfect, and if we are all held to public account and ridicule as we try to solve problems as a collective, we are doomed.  Gard may have been less than gracious as a basketball coach, but his job is to win games and provide lessons leading to the maturity of his players.  Making that sausage is never going to be pretty to watch, but is appreciated as athletes glance back at their formative years in the decades to come – especially for those who become fathers and coaches.

There are lines that cannot be crossed and deserve publicity, but a meeting where thoughts and feelings are shared is not among them.  To break the trust between coach and player – and among teammates is a wretched act of a child unaware of the consequences.

Gard is imperfect, as are all leaders.  But he was not the perpetrator as Wisconsin Basketball took a giant step backwards yesterday.  He and the Wisconsin program are the victim of immaturity and pettiness.