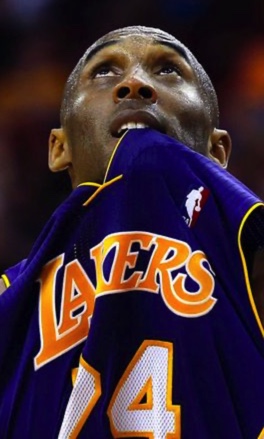 If then GM Donnie Walsh hadn’t been enamored with Erick Dampier in the 1996 Draft, Kobe Bryant might have been photograhed here biting a Pacers jersey.

Twenty-five years ago, the arc of the NBA changed and so did the Indiana Pacers.  That’s how good the 1996 NBA Draft was.

As we ponder the silver anniversary of one of the greatest drafts in league history, assessing how the Pacers changed because of it is a (mostly) fun trip down memory lane.  It’s not that then GM Donnie Walsh totally screwed up – he didn’t, but the talent available where the Pacers selected at #10 is worth remembering for what they brought to the league and could have meant to a franchise without an NBA title in its history.

Let’s talk about who the Pacers took before we dig into who they could have taken.  After Allen Iverson, Marcus Camby, Stefan Marbury, Ray Allen, and Antoine Walker were among the nine picks that preceded the Pacers, Walsh and his staff settled on Erick Dampier out of Mississippi State as their guy.

Dampier had a nice long NBA career as a power forward, but only one of his 16 seasons was spent with the Pacers.  He earned nearly $100 million as a physically intimidating rebounder for five teams.  His true value to the Pacers was as the key piece was in a trade with the Golden State Warriors for Chris Mullin, who became an integral piece of Larry Bird‘s very successful three seasons as coach.

The next two picks were Todd Fuller of N.C. State and Vitaly Potapenko of Wright State who went to Golden State and Cleveland respectively.  Fuller was out of the NBA after five seasons and Potapenko earned just over $40 million over 11 seasons – not bad for the 12th pick in most drafts – but the Cavs will forever be remembered as the team who chose Potapenko over Kobe Bean Bryant.

Of course, the Charlotte Hornets are even better known as the team that actually drafted Bryant but then traded him to the Los Angeles Lakers for two years of Vlade Divac before he left as a free agent.

The Sacramento Kings were reasonable in the use of the 14th pick as they grabbed Peja Stojakovic, one of the best shooters in NBA history.  Next, the Phoenix Suns drafted a slightly better shooter (averaged better than 50%, 40% and 90% from the field, three-point arc, and foul line), and the third most prolific assist man in NBA history.  His name is Steve Nash.

The 17th overall pick was a player Pacers fans would come to enjoy a few years later – Jermaine O’Neal.  He was selected by the Portland Trailblazers prior to turning 18, and traded four years later to the Pacers for Dale Davis.

Among the first 20 players drafted in 1996, four have been enshrined in the Naismith Basketball Hall of Fame, three were NBA MVPs, and 10 combined to play in 64 All-Star Games.

That is a historic haul of quality players who were spread quite evenly among the top 20 picks – an exceptional level for a draft shelf.

The Pacers have the 13th overall pick in the draft to be held one month and one day from today – one the experts say is deep with potential generational talent – but the Pacers don’t need 2021 to be the second incarnation of that historic draft 25 years ago to substantially enrich their roster.  It wouldn’t hurt for the next Kobe to be available when the Pacers are on the clock, but the recent history of the 13th pick is reason for optimism too.

The last three players taken with the 13th pick during odd year drafts were Devin Booker, Donovan Mitchell, and Tyler Herro.  Pacers president Kevin Pritchard would be thrilled to land the equivalent of any of those three.  The three #13s from even years were Georgios Papagiannis, Jerome Robinson, and Kira Lewis Jr., players yet to prove worthy of that slot.

That’s why we love draft night.