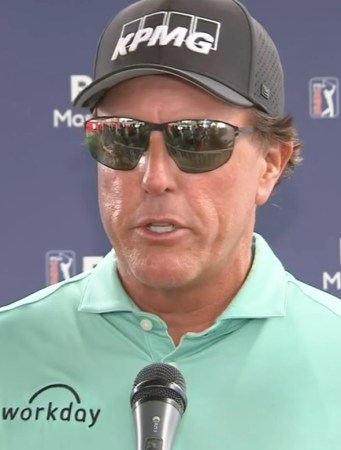 Paying too much attention to the media is a silly indulgence for professional athletes.  It reveals the paper-thin skin of the truly insecure.  Phil Mickelson yesterday showed his fear of the media and respect for its ability to change minds as he announced this weekend’s Rocket Mortgage Classic will be his final event in Detroit.

“It was so much effort for me to be here and to have that type of unnecessary attack,” Mickelson said.  “Not like I care, it happened 20-something years ago, it’s just the lack of appreciation. Yeah, I don’t see that happening. I don’t see me coming back. Not that I don’t love the people here, they have been great, but not with that type of thing happening.”

Here’s a golden rule of talking about the media – when Mickelson says “Not like I care,” what he means is – “I care deeply.”

The Detroit News published the story that got Mickelson’s goat.  They dredged up an unpleasant chapter in Mickelson’s life updating the story of a Michigan bookie who cheated Mickelson out of $500K.  The bet was made more than 20 years ago; the bookie was convicted in 2007 and has subsequently died.  But Mickelson still allows himself to boil with anger when the media fishes for clicks by reminding people of it.

Mickelson is 51-years-old, has won six majors including this year’s PGA and 45 PGA Tour events. He was enshrined in the World Golf Hall of Fame in 2012, and has an estimated worth of $400 million.  Yet when The Detroit News’ Robert Snell writes 1,277 words about the long forgotten sordid affair, he decides never to return to the Motor City?

In his promise to never return, not only does Mickelson paint himself as petulant, but he generates heat for the story.  Sounds like the strategic act of a man who would hit driver instead of four-wood with a one-stroke lead on 18 at Winged Foot in the final round of the U.S. Open – which Mickelson did in 2006 – instead of the golfer who became the oldest to win a major at the PGA just six weeks ago.

Nothing against Snell, but when a golfer like Mickelson allows a reporter nest in his noodle, he elevates The Detroit News to a level of importance it doesn’t can’t otherwise reach.  Life is simply too short for Mickelson to be bothered by such an insignificant intrusion, but even if he can’t resist that temptation – publicly calling out the story is exactly what the media wants.

Media dies without word of mouth, and Mickelson breathed life into a fading paper by yielding to his impulse to deride it.  If he really wanted to punish Snell and the News, he should have ignored the story – or feigned ignorance as to its existence.

That’s true not just for Mickelson for anyone who deals with the media.  Complaints supply heat that drives awareness and then consumption.  Silence deprives media of oxygen necessary to burn.

Mickelson should be smart enough to know how to fade a story, and so should anyone who on occasion sits in the media’s crosshairs.