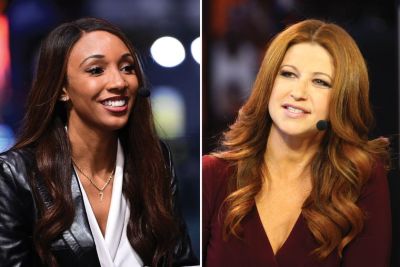 Maria Taylor and Rachel Nichols are in the middle of an ESPN firestorm. Because of it, Rachel Nichols is learning about the disposability of those in her business.

Arrogance is repulsive to people.  We don’t like the arrogant.  That is especially true for those who work in a profession as disposable as sports media.

ESPN’s Rachel Nichols expressed arrogance in a not-so-private phone call, and she is being held accountable by being taken off the network’s NBA Finals coverage.  Eventually, she might lose her job.

For those of you who have not been following this Bristol melodrama, Nichols called LeBron James advisor Adam Mendelsohn during the NBA Bubble in Orlando last year and expressed frustration with colleague Maria Taylor’s rise into a position that threatened her standing with ESPN.  That call was made within range of live camera Nichols used to contribute to ESPN from the Bubble.  The call was recorded and disseminated throughout ESPN’s campus.  The New York Times released that contents of the call over the weekend.

Then all hell broke loose.

ESPN was accused by employees of being progressive toward blacks when convenient and privately restrictive.  Nichols was pulled from her role as the sidelines reporter for the Finals, and Taylor, whose contract is set to expire during the Finals, saw her leverage grow exponentially.

The unfortunate truth for those who work to establish a career in sports media – or any media – is that consumers come for the events, not their work as presenters and analysts.  The men and women who cover the games change constantly, and fans continue coming for the action.  Sadly, for Nichols and Taylor, ESPN would move along quite nicely without either of them – as well as anyone else on the Bristol campus.

Stars rise and fall without great fan consternation.  Did it matter to us when Howard Cosell, John Madden, Dick Stockton, Curt Gowdy, Pat Summerall, Brent Musberger, or Don Meredith moved on – or were moved out?  It did not.  People continued to watch, and will keep watching after Jim Nantz, Reggie Miller, Al Michaels, Jeff Van Gundy, Cris Collinsworth, and Greg Gumbel leave the booth.

Hell, Rush Limbaugh is the most successful radio host in the history of the medium, and when he died earlier this year, the Sun came up the following day and listeners found another show to keep them company in the car.  He’s not a sports guy, but you get the point.

None of that is to demean those who work in media, but it should serve as a loud warning for those who believe they have ascended to territory where they are impervious to the whims of upper management of their media entity.  No one is safe from a bad financial quarter or a managerial meeting that wobbles in the wrong direction.

Nichols is learning that lesson the hard way, as does everyone in media eventually.

Sports media provides a temporary income for those lucky enough to catch the fancy of a manager with the power to hire.  They should show up to work with a smile and celebrate every paycheck as though it is their last – because one of them will be.