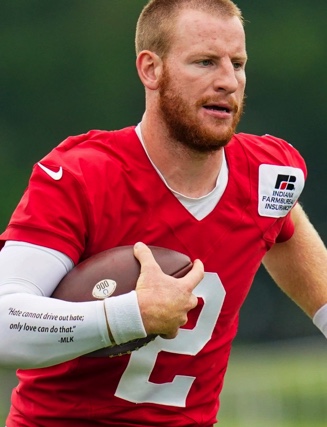 Carson Wentz refused to answer whether he had been vaccinated, but that doesn’t mean we should assume is isn’t vaccinated or tested positive.

No way around talking vaccines now, is there?

I’ve tried, but with Carson Wentz, Ryan Kelly, and Zach Pascal going on the Reserve/Covid-19 list today, there is no avoiding virology as we discuss football.

Full disclosure – there are two reasons I got the Johnson & Johnson vaccine.  The first is that epidemiologists told me getting the vaccine is the quickest way to return to some semblance of a normal life, and I was also told it was the best way possible for me to help keep those I love safe.  More disclosure – I took the J&J vaccine because it was one shot instead of two.  I’m not a fan of shots, so I took the single dose.

One weakness I happily admit to is that I am not an epidemiologist, and I cannot pretend to know more than those who have spent a lifetime studying the behavior of viruses.  When I need legal advice, I don’t read online posts offering judicial counsel, and when I need advice on viruses, I don’t google “Covid” and read until I stumble upon research that agrees with what my gut tells me.

I find experts and quiz them.

As far as the Colts are concerned, we don’t know whether those who are on the Covid List are there due to a positive test or contract tracing.  We also don’t know whether these three players – each essential to the success or failure of the team during their season opener September 12 – has been vaccinated or has not been vaccinated.  We have a pretty good idea because of who wears a mask during team activities, but that’s not a sure thing, so let’s not even go there.

The Colts can’t tell us about positive tests or vaccination status because of HIPPA rules that make private the health standing of all Americans.  Guess if you like, but I will refrain.

We do know that the Colts are among the least vaccinated teams in the NFL.  Frank Reich told us that his roster’s vaccination rate was approaching 75%.  League wide, the vaccination rate has been reported by the NFL to be at 93%.  There are roughly 200 NFL players yet to be vaccinated, and the Colts account for roughly 10%.

But I do know this – teammates and fans have every right to be hot, if because of NFL protocols, a team loses a regular season game as the result of a player or players not being vaccinated.  This is the kind of thing that can divide a team and that team’s fans.

The decision to distrust the government and media has been proven a wise one from time to time.  We are lied to with such maddening repetition that being skeptical of a vaccine or gene therapy is a natural reflex for many.  Denying information and insight from a preponderance of medical professionals is a different issue.

Putting those around you at risk because of your pessimism is like driving your family car 135 miles an hour while they sleep.  If you are a really good driver, the odds are reasonably good everyone arrives safe and sound, but dismissing the increased risk is wildly irresponsible.

Penalizing teammates, staff, coaches, and fans because of a personal aversion to modern medicine and those who advise us on such serious matters is a dereliction of responsibility to a collective, and it should be viewed through that lens.

I hope Wentz, Kelly, and Pascal are either contract tracing victims or asymptomatic.  If not, I hope they recover quickly.  More than anything, I want them on the field September 12th because that is their job – and they are paid exceptionally well to do it.  Season ticket holders pay a hefty price for their tickets, and players skipping a game instead of getting a shot shows a troubling indifference to a wide array of collectives.