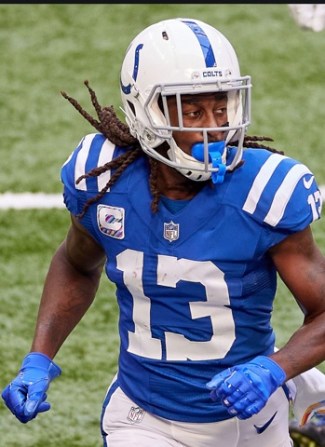 TY Hilton has enjoyed a long and lucrative career for a plucky third rounder out of Florida International.

There comes a time when an athlete’s popularity and fame eclipse productivity, and that time has come for Hilton – a four-time Pro Bowler.  The Colts announced yesterday that Hilton will miss significant time with a disc injury in his neck that coach Frank Reich described as “complicated.”  Reich was unsure about how many games Hilton will miss, “He will miss some games. We don’t know exactly how many. We’re optimistic it’s not season ending.”

Hilton’s final gasp of elite play came in 2018 when he caught 76 Andrew Luck passes for 1,270 yards, despite playing only 14 games.  Since then, Hilton has posted exactly one 100-yard receiving game.  Last year, Hilton was clearly on a pitch count to save him for a playoff run that ended early after being worn down in 2019.

If Hilton’s neck causes him to be IR’ed, that will free up a roster spot, which is a good thing given the glut of good receivers the Colts have on their 80-man roster.  There has been considerable debate about who among Michael Strachan, Dezmon Patmon, and Ashton Dulin would be waived to get the Colts under the 53-player limit by tomorrow’s 4 p.m. deadline.  If the Colts keep six receivers, they are already home if Hilton goes on the IR.

Hilton has always been a popular guy in the locker room and community, but his importance on the field has waned as the Colts have evolved into a run first offense.  If Hilton never plays again, the effect on the Colts record will be negligible.

General manager Chris Ballard’s job is to build depth should aging players decline, and Ballard has.  The Colts offensive scheme is to spread the ball among nine receivers, so with Michael Pittman, Parris Campbell, Zach Pascal, Jack Doyle, Mo Alie-Cox, Kylen Granson, Nyheim Hines, Strachan, Patmon and/or Dulin, quarterback Carson Wentz should have plenty of targets to move the chains and score points.

It’s sad for Hilton that the end may have come for him.  It’s sad for fans too, just as it was with Reggie Wayne, Marvin Harrison, and every other receiver who enjoyed fleeting greatness.  Hell, it even became sad to watch Jerry Rice, the greatest of all-time.  Ask not for whom the bell tolls, right.  It tolls for us all eventually.

But don’t confuse your sadness over Hilton’s decline with a reason to believe the Colts will fail to return to the playoffs this year.  If the Colts fail to qualify for the postseason, Hilton’s absence will not be on the first page of reasons for it.