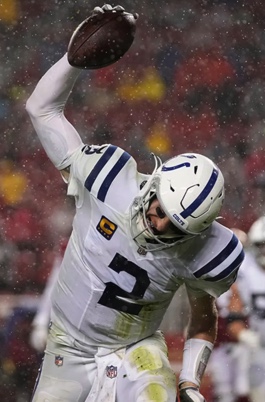 Carson Wentz spiking the ball early in Sunday’s game against the Titans would be a sign of good things to come.

When I was on Dan Dakich’s radio show Monday afternoon to talk about the Colts win in San Francisco, Dan stopped me after I made a claim that the Colts get off to slow starts not just at the beginning of every season, but also at the start of each game this season.

“Whoa, big boy, I’m not sure that’s true,” Dan said.  Unsure of my gut feeling that the Colts started games slowly, I backtracked.  We all know that the Colts have failed to win an opener since 2013, but the claim about starting games slowly was something I had not researched at all.  I said it because I felt it, and sometimes feelings are inaccurate.

Not this time though.

Dan was right to call me on it.  Just like a professor should call out a student who states beliefs without a corresponding citation, Dan wants his listeners to be able to trust information from his guests.  That requires verification.  So here is the verification:

Over the Colts seven games, they have been outscored by a total of 40-27 after each game’s first four combined possessions.  This was especially problematic through the first four games as the Colts were digging out of a hole after each team possessed the ball twice.  Scoring after four drives in those games was a combined 31-6.

After four awful starts, the Colts got things straightened out on the offensive end by scoring one touchdown in each of the first two drives of the next three games.  Even with that reversal of early game fortune, the Colts are still averaging a puny 1.93 points per possession for the season on each of every game’s first two drives.  That’s not nearly good enough to win games against quality opponents like the Titans.

Like I mentioned, the average points in the first two drives in each of the last three games is 3.5.  That is plenty good enough to win over the course of an entire game – against anybody!

To dig even further into math – something I am not enthusiastic about – the first game between the Colts and Titans gave each team nine possessions.  The ninth for the Titans was in the final minute of the game as quarterback Ryan Tannehill took a knee twice, so let’s call it eight possessions for Tennessee.  That makes the Titans winning this game by only nine points pretty damn remarkable given their two interceptions and a fumble lost while the Colts were flawless in the turnover department.

In Titans drives that didn’t end in a turnover, they gained an average of 49 yards and scored an average of five points.  Those numbers reflect a Colts defensive debacle that could have generated a far more lopsided result.

I know this is Optimism Wednesday, but while some are saying that the Colts could have won the first game between these combatants, the likely result was far, far worse.  The only reason the Titans didn’t drop 40 on the Colts was because of their own sloppiness with the football.

To win Sunday, the Colts need to continue their three game string of offensive good starts and slow the running game – Derrick Henry is going to get his, but Tannehill accounted for a full third of the Titans rushing yards.

The Colts are in dire need of a win, a sad truth for all teams that start seasons 1-4, but unless the Colts defense plays lights out in a way they did not appear capable in Nashville, there is not much hope.  Relying upon turnovers didn’t work last time, and it likely won’t this time.