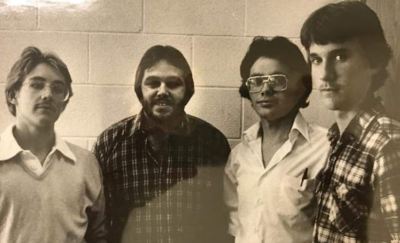 Lee Kelly is the guys smiling in this picture. He helped the play-by-play team from 1978-1980 (Lewie Stevens, John Dougherty, and me) – and thousands of other New Albany High School students become better adults.

Lee Kelly taught radio at New Albany for a long time.  From him, radio students learned about the power of the medium and responsibility to themselves and each other.

Radio was a magical class.  Lee believed the social nature of how radio connects with listeners required the class to be an interactive adventure.  Everyone I knew wanted to take radio.  Lee challenged, trusted, and befriended us.  We repaid his efforts by occasionally living up to his expectations.

I enjoyed the class so much that I made my career in radio, always trying to reflect the lessons Lee either instilled or allowed us to discover on our own.

Over the last 10 years, radio has receded in importance as podcasts have exploded as a dynamic force in media.  As New Albany reflects this afternoon on the work and wisdom Lee invested in the school and students before retiring and then passing away almost two years ago after a brief fight with lung cancer, I can’t help but think about how fun radio used to be and why people today are opting to ignore it.

At its best, radio is spontaneous, organic, and connective.  It should be a live voice from a human being in a small room connected with another human being driving in a car, laying on a couch, or sitting at a desk.  Sometimes songs play, sometimes not, but they are always accompanied by a the voice of a live human being who is also enjoying the song.

That’s the way it used to be.  Then consolidation allowed individual companies to own thousands of stations.  That led to workplace efficiencies that drained the magic from radio – turning it from a link to other people into nothing more than a mostly useless music box.  Technology now allows us to play whatever songs we like best just by saying “Hey Siri, play (insert song title here).”  So why listen to radio?  The connection is gone and I can program my own playlist to better serve my musical tastes.

Talk radio has devolved in most cities into a milquetoast amalgam of non-challenging and ill-prepared pablum.  Granular listenership data has allowed management to mandate ideologies and styles for hosts to maximize use measured by online clicks.  Instead of hosts, producers, and board-operators trying to do cool stuff, they are serfs to administrators and number crunchers who answer to metrics driven by upper management in distant cities who evaluate spread sheets instead of product.

And then management at the big radio companies whine about audience erosion without any cognition that they themselves are the parties responsible for it.  Radio has become that self-destructive friend who refuses to grasp that his ongoing decisions have been the cause of his own failures.  Ironically, upper management now believes entering the podcast space will be their salvation when it was they who created that monster through their own short-sightedness with radio.

Lee Kelly managed WNAS in the best possible way.  He allowed the staff create and grow while inviting listeners to marvel at its audacity.  He humbly empowered students, gave us room to screw up, learn, and improve.  At every station where I have worked, I tried to share Lee’s seemingly obvious but often ignored insight that radio is about people connecting with one another.

People connected with Lee and each other in New Albany High School’s radio class.  It was a welcoming place where friendships were born and flourished.  WNAS was led by a patient sage who allowed his students to discover the magic in radio and each other.

Lee’s students, family, and friends with gather at the WNAS studios to share memories and pay their respects today, but Lee’s impact is still present in all of us.  I only wish those who are currently stripmining radio of its magic through short-sighted result-based management had been fortunate enough to fall in love with radio and each other at WNAS as we did under the wise tutorage of Lee Kelly – a teacher in the best sense of the word.