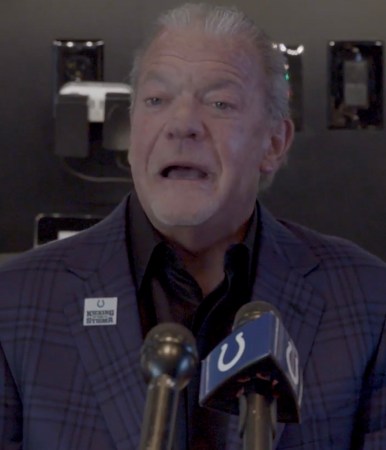 Jim Irsay – the optimist of all optimists – has not yet proclaimed the Colts to be Super Bowl favorites, but that hasn’t stopped fans from doing it!

Year after year, it seems fans of the Indianapolis Colts fail to learn their lesson when the schedule is released.

Social media posts, including comments on my YouTube channel, are filled with pie-eyed optimism, including bizarrely bold predictions about the Colts going undefeated through the regular season – something that has occurred only twice by any NFL team in the last half century.

I get it.  The Colts will be undefeated for the next 120 days, and if there was ever a time to feel good about a September season opener, it is on May 13th.  The Colts ridded themselves of the woebegone quarterback stylings of Carson Wentz, and the Bears hired Matt Eberflus so the Colts defense will no longer give a 12-yard cushion to opposing offenses facing a third and eight.  That kind of addition by subtraction has to yield 17 wins, right?

Let’s slow our roll for a moment, and pause to remember it has been nine years since the Colts started a season with a win, and 13 years since they won their first two.  In fact, the last time the Colts went 2-0, Peyton Manning & Company went on to win the following 12 before Bill Polian pulled the plug on an undefeated run against the Jets.

The Colts open the season against the Houston Texans, unanimously believed to be the NFL’s worst team.  The follow-up is against the Jacksonville Jaguars, a team many believe to be the second worst.  The Texans and Jaguars can be easily vanquished if they simply perform to expectations, but early in the season teams are blissfully unaware of reality.

Remember the 2020 season opener against the sad-sack Jags?  The Colts unveiled their new offense with future hall of famer Philip Rivers, and the Jags turned to second-year mullet-clad mediocre Gardner Minshew.  But no one told Minshew he sucked, so he didn’t.  He completed 19-20 passes for 173 yards, three TDs, and zero picks, as the Jags won 27-20.  Thanks, Matt Eberflus!

This year, future hall of famer Matt Ryan has come to Indy to lead the Colts out of the misery of their 2021 late season collapse.  The Texans will counter with second-year quarterback Davis “Mr. Ordinary” Mills.  We can hope the Colts learned their lesson in 2020, but can’t know for sure until the kickoff on September 11th.

And a fast start this year is mandatory to win the AFC South, which is the Colts most likely route to the playoffs.  Five of their first seven games are against division rivals, and nine of their first 10 opponents are from the AFC.  A bad start will kill any chance of winning the South or capturing a tiebreak.

In no way am I trying to crap on your Corn Flakes this morning, or ruin your tasty offseason buzz of positivity, but every year fans and media look at the schedule and say, “No way the Colts win less than 11!”  Once in the last seven seasons, they have lived up to that expectation.  They have not exceeded 11 wins since the 14-win campaign of that aborted perfect season in 2009.

Maybe the Colts get it done this year.  Maybe this is the year it all comes together.  Maybe Matt Ryan turns back the clock six years and returns to form as the NFL MVP.  Maybe, Parris Campbell and other Colts who occasionally miss time due to injury will stay healthy for all 17 games.

Or, maybe the Colts are built to not suck instead of be great.  Maybe the 42-42 (including 1-2 in the playoffs) cobbled together during the Chris Ballard Era is the standard, and positive wobbles of a win of two is the best that can be hoped for.

May is a month for two things in these parts – daring speed at the Indianapolis Motor Speedway and brave optimism about the Colts.  Sixteen days to thrills of the Indy 500 and 120 days to reality for the Colts.

One of these years, the optimism has to hit, right?