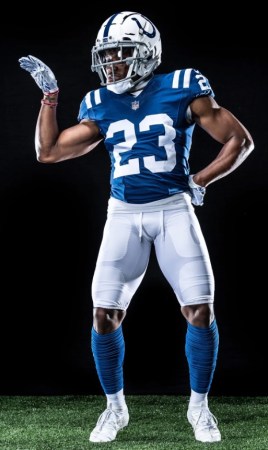 Colts slot corner Kenny Moore stands like a teapot waiting to be filled with cash!

Colts cornerback Kenny Moore is as universally liked and respected as anyone in the locker room or on the field, and he is frustrated with his contract.

Moore has avoided working through two OTAs to draw attention to his frustration and try to compel general manager Chris Ballard to negotiate a new deal to lift his level of pay to reach his level of pay.  But Ballard has a problem.

Despite Moore being widely held as the best slot corner in the NFL, if Ballard shreds Moore’s current deal, there will be a line of agents outside his door hoping for similar treatment.  While Moore is a wonderful story – undrafted free agent signed and cut by the New England Patriots before being rescued by Ballard and the Colts and earning a $33 million bounty just two years later as an acknowledgment of his consistent quality play – there are more important Colts earning far less.

Moore is scheduled to earn $6.75 million in 2022 and $7.545 million in 2023, according to Spotrac.  Not bad compared to Michael Pittman Jr., who will earn $1.39M this season and $1.78M in 2023.  Pittman’s rookie deal will expire at the same time as Moore’s extension.  Do you think if Moore earns Ballard’s attention and owner Jim Irsay’s money by sitting rather than working, Pittman might see the same value in copping a squat?

Right now, Pittman is a standalone high quality outside target for new quarterback Matt Ryan.  Maybe second round pick Alec Pierce and perennial injury list resident Parris Campbell will give the Colts outstanding options at wide receiver, but no one is willing to contemplate a season without Pittman.  Moore is really good, but Pittman’s 88 catches, 1082 yards, and six touchdowns are irreplaceable.

And what about Jonathan Taylor?  Taken a little bit later in the second round of the same draft as Pittman, Taylor established himself as the NFL’s best running back in 2021 as he became one of 23 men ever to rush for more than 1,800 yards.  He also scored 20 touchdowns.  On the importance continuum, Taylor rides just a little north of Moore.  His contract ends simultaneous to both Pittman and Moore.

If Ballard was willing to make an exception and shred a contract with two years remaining, Moore woulde be third in line for that privilege, behind Taylor and Pittman.

An NFL budget is like a 53-piece jigsaw puzzle, and Moore is trying to motivate Ballard to change the shape and size of his piece at least one year prior to the schedule Ballard has enforced since taking the Colts GM job in 2017.  Ballard has accommodated player extensions (including one for Moore) one year before a current contract’s expiration, but none two years in advance.

Whether Moore deserves more cash right now as his career clock continues to tick is not at issue.  Neither is the sanctity of the contract bearing his signature, which is a major sticking point among fans who make a practice of honoring their deals.  The issue that requires Ballard’s rigidity and Moore’s reasonability is the tectonic effect a renegotiation would have on the financial interest of teammates, and the team’s collective salary cap.