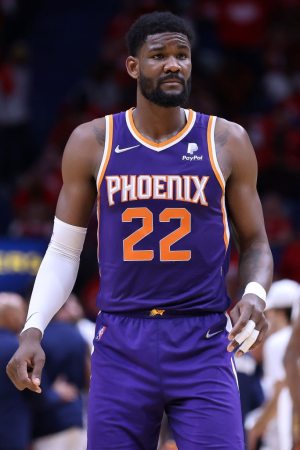 Deandre Ayton has yet to live up to his #1 overall pick pedigree, but that doesn’t mean he can’t help the Pacers win long-term.

Deandre Ayton to the Pacers seems like a good idea.  The upgrade over Myles Turner is obvious, and his upside is certainly trumps Turner’s.

It’s even possible for the Pacers to sign Ayton, the former #1 overall pick, as a restricted free agent with a qualifying offer instead of giving up assets like Turner or draft picks in a trade.

So why not pull the trigger and make the deal?

Not so much.  The cogent question is exactly how many more wins per year will Ayton be worth than Turner over an 82 game season?  The Pacers won 25 games last year, which was fifth worst in the NBA – 18 games removed from the record that landed teams a spot in the play-in games to determine the seventh and eighth seeds in the Eastern Conference playoffs.

If Ayton, along with other roster upgrades, can’t play well enough to earn a postseason berth, all the Pacers will be doing by signing or trading for Ayton is robbing themselves of an opportunity to grab another stud in the seemingly loaded 2023 NBA Draft, which includes the latest once-a-generation talent Victor Wembanyama.

Ayton’s total win shares number last year was 7.3.  Reducing it by Turner’s 3.1 gives the Pacers a net return of 4.2 wins over last season.  Hard to imagine the Pacers climbing significantly in the standings by pulling the trigger on this deal – even with Tyrese Haliburton for a full season and Bennedict Mathurin enjoying as good a rookie season as can be imagined.

The Pacers also need to factor in the two first round picks they acquired via trade from the Celtics and Cavaliers, (Cav’s pick is lottery protected).  That gives Pacers president Kevin Pritchard some significant ammunition to continue to restock the shelves with youthful talent.

There is no debate Turner no longer fits in the Pacers plans, regardless of what Rick Carlisle says to the contrary.  The Pacers are going in a direction that do not sync with Turner’s maxed out skill set, and sending him to Phoenix or elsewhere makes the roster flip nearly complete.

No one believes the Pacers are this one move away from contention in the East, so why erode their ’23 draft equity by becoming marginally more competitive?

Getting bad to get great sucks in the short-term, but the Pacers appear have committed to that process – at least for one more year.

If Ayton fits into the rebuild as part of the longterm plan, pull the trigger, and figure out over the next three months how to suck in October!