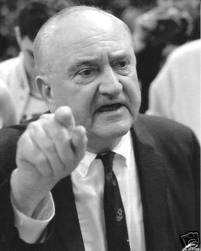 Kentucky has won more games than any college basketball team in history.

As a celebration of the price the Wildcats have paid for glory, we will take a look at the top five moral compromises made in earning many of those wins.

#5 – The 1952-1953 Kentucky team was suspended for the entire season by the SEC and then the NCAA for point-shaving violations and relationships with gamblers despite coach Adolph Rupp’s claim that gamblers “couldn’t reach my boys with a ten-foot pole.”

They did reach them, and after years of taking money under for beating teams by more or less than the point spread, the NCAA acted.

The May 12, 1952 issue of TIME Magazine quoted judge Saul Streit, who presided over the trial of players from Kentucky involved in fixing games for gamblers, “I found that intercollegiate basketball and football at Kentucky have become highly systematized, professionalized and commercialized enterprises. I found covert subsidization of players, ruthless exploitation of athletes, cribbing at examinations, ‘Illegal’ recruiting, a reckless disregard of their physical welfare, matriculation of unqualified students, demoralization of the athletes by the coach.. .”

That wasn’t all.  Streit also charged “that Rupp 1) wined and dined Curd at Manhattan’s Copacabana nightclub;* 2) with the knowledge of the players, was often in contact with Curd to get the gambler’s ‘line’ on Kentucky games; 3) once bawled out a player for missing a shot that ‘just cost my friend, Burgess Carey, $500.’ In addition, Streit charged that a player was crippled for a month when coaching authorities allowed him to play on an injured ankle shot full of novocaine. ‘In view of his conduct,’ Streit observed, ‘Mr. Rupp’s sanctimonious attitude . . . becomes ludicrous and comic.’

It gets worse for The Baron, as Rupp displays a narrow and strange attitude in Kentucky Greatest Moments #4 tonight.