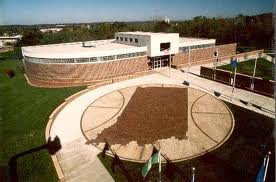 There is something so fundamentally right about watching high school basketball in the state of Indiana that regardless of the teams competing, it’s compelling.  Nothing over the holidays is more fun than making the trip to New Castle to watch the Indiana Basketball Hall of Fame Classic.

I’ve never seen Washington or Center Grove play, and don’t know a soul in either community, but the game between these two teams this morning was an instant classic.

Indiana recruit Cody Zeller led the Hatchets or Washington shaker Andy Smeathers who has committed to Butler.  Zeller won the battle in the first half with 18 points,coming by way of three pointers, mid-range jumpers, free throws and a dunk.  Smeathers had five points, playing very little of the second quarter.

Center Grove opened in a two-three zone, which suited the shooters from southwestern Indiana just fine.  Two minutes into the game, Washington built an 11-3 lead, and carried a 26-17 lead into the second quarter.

The defense changed, and so did the Trojans fortunes, cutting the Hatchets lead to 38-36 at the half.  Center Grove shadowed Zeller everywhere in a box and one, and Zeller’s 12 in the first half became six in the second.  And that turned into six in the entire second half for a total of 24 to lead all shooters.

Washington lost 68-64 in a game Center Grove dared the Hatchets to take and they almost did.

The kid who spent a good portion of the last three quarters face guarding and generally making Zeller’s life miserable was Mark Kwiatkowski, who was without a doubt the most valuable player for Center Grove despite Johnny Marlin running the point and leading the scoring for the Trojans.  Here is a video of their battle throughout the final three quarters:

This is the road that big kids with freakish athletic abilities from southern Indiana travel.  They get battered and abused by smaller kids who are told by their coaches that they want to know what flavor chewing gum they’re chewing.  That’s nothing new for the Zellers with older brothers Luke and Tyler preceding him.

And neither are the expectations that will follow Cody next year as he accepts his role as the freshman with the biggest shoes to fill at Indiana University since Eric Gordon, and before that Alan Henderson.

No question Zeller has the raw gifts to fulfill those expectations, but there is also no question that like most big men, his development will come in time.

He showed the 9,000 fans here (including his future head coach Tom Crean and assistant Tim Buckley) something today, and that a little mean streak.  The Kwiakowski kid paid the price for getting in Zeller’s grill with a few well-timed elbows and shoves.  Not enough mayhem to draw the attention of the officials but plenty for those looking to see if he would shrink from the challenge.

When he has kids, Kwiatkowski is going to be able to look them in the eye and say, “I stoned Cody Zeller in the Hall of Fame Classic.”  It’s not quite Dan Dakich holding Michael Jordan to negative points in the 1984 NCAA Tournament, but on a day that felt like spring, it’ll do.

That’s the great thing about an event like this.  You show up ready to watch Zeller and Smeathers, but wind up talking about two kids you haven’t heard of.  That’s the beauty of Indiana high school basketball, and why a drive to this unbelievable field house two miles north of the Steve Alford Inn on State Road 3 in New Castle is one of my favorite holiday traditions.

The second game this afternoon was a nail-biter I watched a little but.  Bloomington South beat Warsaw in a tight game, but to be honest I spent the whole game catching up with the parents of Butler’s Matt Howard.  Stan and Linda Howard are two of the best people on the planet and any chance I have to spend time with them puts all else on hold.

Tonight Center Grove will play Bloomington South in the championship, and Washington will face Warsaw in the consolation game.