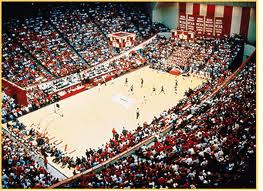 Assembly Hall is a quaint and tradition rich answer to the question of where Indiana Basketball should call home.  At some point soon (2015 and beyond), fans and players will deserve more and better.

Indiana athletic director Fred Glass has a lot on his plate.  Making sure that the athletes at IU are having a positive experience keeps a man busy.  Evaluating the ability of coaches to both win and prepare athletes for the challenges of adulthood is a full time gig.  Fulfilling the expectations of fans who financially support athletics is a whole different test.  Lots to do, and only 168 hours a week to do it.

Upgrading the facilities at Indiana has been a big push over the past decade with the closing of the endzone – more important for the weight room and academic space within the building than the aesthetics, although Memorial Stadium looking like an honest to God college football stadium is good for fans who felt cheated for decades when they went on the road to follow the Hoosiers.

With Cook Hall, the basketball program finally has a place the players have access to 24/7, even when concerts or other events displace basketball from Assembly Hall.  Watching the players get shots up in the HPER during the mid-1980s always made me sad.  One of the first things recruits and their parents look at when evaluating schools is whether the facilities will accommodate substantial basketball dreams.  Cook Hall fills that bill as well or better than what any school in the country offers.

So now what.  What’s the next item on the agenda in the growth of IU athletic infrastructure?  The press box at Memorial Stadium should definitely be replaced by a new facility for the media that extends the length of the westside of the stadium that will feature luxury suites.  I love the fact that the haves and have-nots all huddle together in the cold to watch the Hoosiers, but the time has come for the fat cats to be allowed to spend some of that wealth on comfort, TVs, and bourbon.

The other need is a new basketball arena.  When paying a visit to Wisconsin’s Kohl Center, the Yum! Center in Louisville, or even the United Spirit Arena in Lubbock, Texas, where the Red Raiders play, the increased quality of the experience is obvious.  There are suites, excellent sight lines, and everyone in the building can see the scoreboard.

Assembly Hall has served its purpose well, and he host so many great events, listing them would take a book, not a post.  The building is virtually unchanged from the day it was built.  I can’t think of a single change since my freshman year, minus the removal of Dan Parisi for IUSA President bumper stickers and instillation of the giant scoreboard and electronic video panels that front the scorer’s table.

There are no suites.  The sight lines are great for roughly half the fans.  The balcony seats are so far removed from the floor and so high that identifying individual players is almost impossible.

Glass told the Fort Wayne News-Sentinel in an interview published today that replacing Assembly Hall is near the top of any to-do list, “That’s not a front burner issue and probably not even a medium burner issue. That’s a back burner issue. It’s gotten the attention of the board of trustees from time to time. I think Cook Hall with all of its bells and whistles and attractiveness to student athletes, buys us some time to not have to do anything with Assembly Hall.

“Assembly Hall works fine. It’s a great venue. It works economically. The main challenge with Assembly Hall is that it’s old. We just put $3 million in the roof, which stinks because nobody sees it. It’s like status quo, but it cost $3 million. If the economy picks up and we start getting hotter than a firecracker, would we look at it? Yeah, maybe. It’s not anything I’m burning up to do in the next 10 years here.”

When 3,000 seats a game remain empty for games, building a new arena would be the act of a madman, but the program in four years is going to be “hotter than a firecracker” if the verbals from Indiana recruits turn into signatures on letters of intent.

The Yum! Center cost $238-million and seats 22,000.  Using university resources and squeezing alums, boosters, and anyone else who feels indebted to good ol’ IU to the extent to fund such a glorious building is a tough sell for a program that has won 26 games total over the past two years would be a fool’s errand, but getting a jump on plans would be prudent.

Those empty seats won’t sit idle long, and ducats for games will be as prized as they were in the glory days when the Hoosiers won the Big Ten every other year, and national championships every five.

2 thoughts on “Indiana Basketball – Is It Time for a New Assembly Hall?”