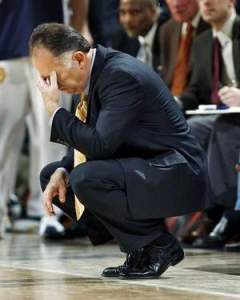 This is as happy as former Pacers coach Jim O'Brien was in his 3 1/2 year run in Indiana.

There is some magic in the honeymoon period for a new coach.  Fan and players alike believe that anything can happen, and that level of hope can allow teams to achieve beyond their talent.

Sports teams and businesses alike need an occasional reboot.  An 82-game NBA season can be drudgery.  The players go through the motions, and play to their potential almost never.

The Jim O’Brien era was marked by players who appeared to be having 82 prostate exams each season rather than playing basketball.  They obviously responded poorly to O’Brien’s demands for improved play, and the players obviously had no affection at all and little respect for their leader.

Great people skills trump strategy every time because no strategic brilliance can overcome indifferent execution.  A bad strategy can win if it’s executed with passion.

There has been one consistent issue in the behavior of the players that should imbue Pacers fans with some hope.  The players being interviewed in the media over the past few weeks have consistently referred to Vogel as “Coach Frank”.  With O’Brien, players were resolute in simply calling him “O’Brien”.  Not a lot of respect given to O’Brien in comparison.

The next four games appear to be winnable, beginning tonight at home against Toronto, and minus two games against the Miami Heat, most games during the next three weeks are against the dregs of the Eastern Conference.

This is a crucial stretch for the Pacers as they have a March loaded with 11 road games.  If the Pacers are serious about making the playoffs, the next three weeks will put them in that position.

So who is this Frank Vogel guy?  Very few who don’t travel with the team know anything about him other than he is a 37 year-old guy who has been on O’Brien’s staff at every stop, and began his career as a Rick Pitino video coordinator.

There is one very important distinction between O’Brien and Vogel, and that is that Vogel has watched O’Brien make mistakes in managing the player, and like any smart guy, knows exactly what he will do to correctly all those problems.  That’s what bring some success to interim coaches.

Left to their own devices, these guys might not be able to install their own successful culture, but for a short period of time they can succeed by being what the guy they are succeeding was not (see Mike Quade with the Chicago Cubs during the last 37 games of their 2010 season).

An additional boost for the team could come as the trade deadline approaches.  Larry Bird has three significant expiring contracts this season along with the Jamaal Tinsley money finally pealing off the cap number.  He could either make a significant trade for immediate help, or he could wait for the offseason to sign several big money free agents depending upon the new collective bargaining agreement if there is one.

The changes we can look for immediately:

And as the Pacers are talking the talk about making a push to make the playoffs, that’s a good place to start.