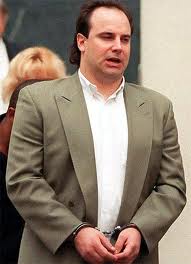 Second chances make for great third acts, and America boasts a wonderfully theatrical society that allows and rewards redemption.  Art Schlichter is working on a quarter century of criminal behavior, convictions, and releases.

Released from prison in 2006, Schlichter authored a tragic autobiography, “Busted”, that detailed how his life went horribly awry because of his gambling addiction.

It didn’t take long for Schlichter to revert to what he knows best – preying upon the trust and decency of others.  According to a story in this morning’s Columbus Dispatch, Schlichter met the widow of the former Wendy’s chairman Robert Barney at one of his appearances at a church.  Barney believed his message of wanting to make amends, and began loaning him money so Schlichter could pay back debts he had accrued during his previous nefarious life.

When Barney no longer had any money of her own to loan, he persuaded her to lean on friends for more.  Schlichter told her that he was in the middle of a potentially profitable ticket brokering scheme, although I doubt he used the word ‘scheme’ himself.

Feeling shamed and hopelessly entwined in Schlichter’s amorality, Barney drove to her husband’s grave and was ready to kill herself when she received a call from her son that talked her into choosing not to pull the trigger, “That guy is not worth killing yourself over, Mom,” he said, according to the story in the Dispatch.

How many lives does Schlichter need to trash before he’s finally locked up for good?  Many will point to the addiction from which he suffers as the culprit as though Schichter is not responsible for the harm he has done to others.  They will say this is a good man with a disease, and they might be right.

Addiction is by definition a powerlessness over your own behavior, and there is an addiction for virtually every negative behavior in our society.  Whether it’s substance abuse, gambling, sex, or violence, many people seek to satisfy physical cravings over which people have little or no control.  People spend a lot of money and expend endless effort for the rest of their lives to successfully battle those addictions, so they can live productive lives and rebuild the relationships they might have damaged during the periods when their addictions won the battle over their behaviors.

Schlichter clearly indulges his addictions at the expense of anyone whose path he crosses, and the result has been a trail of broken and corrupted souls.

If the story of Anita Barney is true, Schlichter should return to prison and rot there.  Society’s ability to forgive should have an expiration date, and that date has passed.  A woman tried to do the right thing, and that largesse meant nothing more to Schlichter than a free pass to indulge himself.  Powerlessness is no excuse for a trail of corrupted and ruined lives.

At some point, and this is a point Schlichter passed long ago, incarceration is no longer about rehabilitation; it’s about protecting society from people who have no ability to discern right from wrong.  People as a rule are trusting and try to do the right thing.  Men like Schlichter seek out these well-meaning rubes and suck them dry.

The difference between a murderer and grifter like Schlichter is that murderers kill quickly, and Schlichter strips souls of their self-respect.

Stories of redemption make good books and movies, but this isn’t one of them.  Schlichter is out of chances, and women like Barney should be protected from him forever.

Schlichter’s life is no longer a tragedy; it’s an irretrievable malignancy that can’t stop infecting the lives of others.  The tragedy is owned by those who know him.

One thought on “Art Schlichter Is a Financial Predator, and Should Be Locked Up and Forgotten”