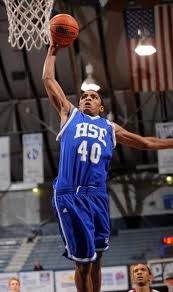 There is something challenging about a great basketball player.  People watch and they run through a mental checklist of skills and abilities.  The first time you see a kid who is highly touted, the feeling is “going ahead and prove something to me.”  Well, Gary Harris proved something tonight.

In a gym that has seen some of the best at their positions in the last 20 years of Indiana high school basketball, the 6’4″ Harris brought to mind two of them from the tip to the buzzer tonight.  As Hamilton Southeastern beat Lawrence North 60-49 in a game that wasn’t nearly that close, Harris conjured a combination of point guard Michael Conley and wing Chris Hill.

He had 21 points (scoring every way possible), nine boards, and six assists tonight against a good LN team.  Harris is the clear leader on the team.  When he was on the bench for a couple of minutes each half, HSE looked like a completely different team, and that’s not surprising when missing a kid ranked as the second best shooting guard in the county by scout.com and #12 overall by ESPN.

Harris is obviously strong, and that keeps him from being moved around as he drives.  He’s quick, can run, and jumps easily.  Handling – check.  Shooting – check (at least tonight).  His defensive awareness is off the charts like Conley, and the only way to keep him from dominating the game offensively – even when not scoring – is to deny him everywhere.

This is not some ordinary kid who plays basketball.  Gary Harris is the kind of kid that does enough things well without abandoning a team focus that it’s easy to see him playing for a national champion in two or three years.

There is a great book on baseball that was written by Indiana sportwriting dean Bob Hammel and longtime Baltimore Orioles scout Jim Russo called “Super Scout”.  In the book, Russo talks about the day the Orioles went from doormat to champion.  The general manager gathered his scout and told them that he wanted nothing to do with any prospect that the scouts didn’t believe was a potential ingredient on a championship team.

Once good enough was no longer good enough, and the criteria for signing players evolved to “champions” instead of “players with a skill set, the Orioles built a culture of winning that lasted two decades.

Harris is one of the few kids who obviously fits that mold.  Everything about the kid yells winner.

No chest thumping, posing or unnecessary flash – just solid play that puts Hamilton Southeastern in a groove where the other four players on the floor function very well – like Hill.

Christopher Thomas runs the basketball training program 100% Hoops, and he is very positive about the kids that he trains.  When I asked Chris about Harris, I expected some hyperbole, but his demeanor changed a little from the rap about some of the others he works with.  He got calm and was very matter of fact.

That’s not Chris selling the virtues of Gary Harris.  That’s him being completely honest because he believes Harris needs no hype.

HSE is ranked #3 by the Sagarin rankings with a 14-2 record, and a week from Tuesday will play Marquis Teague and 14-3 and fifth ranked Pike High School at Hamilton Southeastern.  I’m going to that game, and you should too.

You won’t need a program to tell you which kid Harris is.  He’ll be the one your eyes immediately focus on.

Here’s a highlight video of the kid some very lucky college fan will going to get to watch play for their school.