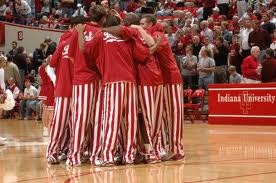 Things in Bloomington are quiet – too quiet.

The news in Bloomington generally pours out of Cook Hall to the tens of thousands of Indiana faithful who continue to wait patiently for the development of the current roster , as well as the arrival of the next wave of Indiana kids who can’t wait to wear candy stripes and challenge themselves to hang a banner or two.

But in the middle of May, there hasn’t been a stir in two weeks since the little known Remy Abell decided to spurn offers from Penn State, Butler, and Xavier to accept Indiana’s offer to join the program.

Tom Crean is still pushing for a big man for the 2011 class which would put the Hoosiers one over the limit of 13 scholarships, and more players in the 2012 class where they are also full.

These are interesting times for a program that appears to be ready to take a meaningful leap forward.  ESPN bracketologist Joe Lunardi had Indiana as a last four in at-large team in his 2012 NCAA bracket, and then inexplicably dropped them to where they are no longer listed at all – not even in the last four out.

It doesn’t make any difference what Lunardi thinks, even in March when people mistakenly invest emotionally is his evaluation.  Ten months prior to Selection Sunday, you could line up the Hubble and the Spitzer Space telescopes end-to-end and still not see his relevance.

There are five reasons for Indiana fans optimism, even if the Hoosiers don’t impress Lunardi, as they look ahead to a bit of a make or break season, at least for the fans’ patience:

Indiana isn’t going to win a National Championship next year – or at least it would seem exceptionally unlikely – but they are going to get better because they have continued to believe.  That is a credit to Crean and the attitudes of the players.  It would have been easy for the Hoosiers to show up for the Big Ten Tournament two months ago looking ahead to spring break, but they came ready to compete and win, and never accepted their role as the 11 seed.

There was something very noble and admirable about their willingness to believe they had a chance not just to win the opening round game against Penn State, but the entire tournament.

The first step toward success is a common belief, and Indiana showed that last year.

People bang on my ass for being so relentlessly positive of Indiana basketball.  The reason for that is easy, and it’s not because I am a fan.  I cheer for people I like, not teams.  The reason for the encouragement is that writing about how fans should be cynical after eight Big Ten wins in three seasons would be way too simple, and you wouldn’t want to read it.

There is also my belief that IU is getting better.  There is light at the end of the tunnel, and for those who can’t see it, I want to help.

Indiana is on the road back, but it’s a long road.  If you have ever driven across the country from New York City to Los Angeles, you know how progress appears slow.  Kansas sucks, and IU was driving through Kansas last year.  While they aren’t to California yet, the Hoosiers are moving toward the beach.  The landscape may look as dreary as it did in Ohio, but the car is moving in the right direction.

It may be quiet now, and the countryside out the window dull, but noise will be here soon enough.

27 thoughts on “IU Basketball – What’s Going on in Bloomington?”