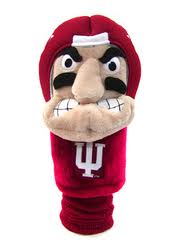 This is what IU did with a head cover. Imagine the crazy hell they would raise with a mascot!

What the hell kind of an awful representation of the state of Indiana would prowl the sidelines at Memorial Stadium if Indiana University decided to re-animate the long dormant mascot program at IU?

Terry Hutchens of the Indianapolis Star wrote a piece today quoting several fans, all with very different ideas about how and if a mascot should return.  None agreed with the other, and therein lies the rub.

Either it would be some some giant hayseed in overalls named Harry Hoosier with straw sticking out of his sleeves, or an enormous gas pump named Ethel Ethanol (pleasing the clients is always job #1).  Maybe “Hoagy Hoosier” a big glitter covered sandwich commemorating both Indiana’s love of food and Hoagy Carmichael, the writer of “Stardust” and “Georgia”.

Regardless of the choice, 80% of the people would hate it.  The response would either be, “What the hell is that awful thing?”, or “Jesus, could we portray ourselves as any more feeble and stupid?”

For a good look at the national image of Indiana, you need look no further than two network sitcoms.  “The Middle” (Wednesdays 8p, ABC) stars Patty Heaton as the mother of a family of idiots who shop at the “Hungry Hoosier”, and Amy Poehler is a civic employee in fictional Pawnee, Indiana, in “Parks and Recreation” (Thursdays 9:30p, NBC).  References to obesity as a source of pride for Pawnee residents are both hilarious and a nightmare for every chamber of commerce in the state.

Sadly, any mascot that accurately conveys the image of people in the state would be a horrifying reflection or a complete fraud.  Best to just let sleeping dogs lie.

No doubt that the amount of goodwill a mascot can generate is a serious inducement to the university to stick a gymnast in a funny suit.  Ask an eight year-old what he or she loves best about going to an Indiana Pacers game, and 90% will respond “Boomer”.  Over the past few years, many adults would have agreed.

As IU tries to engage potential customers, it would be great to be able to send a mascot out to entertain kids and make appearances at client locations.  But when the decision is made as to what this thing looks like, IU folks need to exercise care.

Purdue has “Purdue Pete” – a mascot that appears to be popular among Boilermaker fans, but is terrifying to children and a frowning menace to adults not clued into his heritage.  “Pete” is a huge-headed frowning hulk of a hammer-wielding man, and how that promotes the Purdue image is anyone’s guess.

The university changed Pete’s appearance briefly this year before the outcry from students, alums, and high level staff caused the hurried return to the old Pete.

That will be the reaction Indiana University faces if it unveils a breaded tenderloin in tights.

Better to make no decision than a bad one, and that is the decision IU has made since its 1979 shaggy-haired Fred Flintstone look-a-like “Hoosier Pride” debuted and retired almost simultaneously. 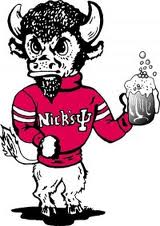 My idea in the late 1980s was rejected out of hand, but I still think it’s the best because it’s already an accepted icon in Bloomington.  It might be a little reminiscent of the bison that failed in the 1950s – in fact, giving it more than five seconds thought, it’s pretty obvious where the idea for the Nick’s English Hut mascot came from – but why not use what’s on the sign at Nick’s, including the Nick’s sweater.

He’s like Purdue Pete only angrier and hairier with horns, and instead of holding a hammer, he’s got a handful of delicious golden ale.  What screams Bloomington more than a beer at Nick’s?