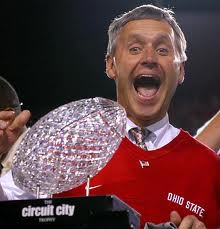 The only question I would ask Jim Tressel today is whether the moments of joy he experienced were worth his decisions to lie about NCAA violations.

Ohio State president Gordon Gee finally had enough.  The constant Chinese water torture of the drip, drip, drip of information about screwy violations that were nothing more than kids doing what kids do pushed the button that made Tressel a bigger liability than an asset.

(Yeah, yeah, I know this is being painted as a resignation, and technically it was a negotiated resignation, but anyone who believes Tressel left of his own volition is delusional.)

Once again, we learn that lying is what eventually causes the unraveling.  If not for Tressel’s decision to not share information with his boss and the Buckeyes compliance department and then to sign the NCAA form stating he was unaware of any NCAA violations, he surely would have survived the scandal of players selling memorabilia for cash and tattoos.

There is no way to stop players from selling stuff they own, but a man like Tressel has to be resolute in his role as part of a solution, not part of the problem, and lying to protect players makes him the poster boy for the problems that plague college football and basketball.

While this is a sad day for the Tressel family and those in Ohio who revere the man in the sweater vest, it’s a solid day for morality in college athletics.

Until the NCAA decides whether BCS football and men’s basketball are minor leagues for future professionals or part of a college education for amateurs, the line between success, failure, good and bad will constantly be gray and elusive.  Rules prohibiting kids from selling their own property are absurd, and the coaches know that.  Who can blame a kid without a dime in his pocket for taking $2,000 for a Big Ten championship ring, especially when he collects one every year?

Tressel didn’t blame the kids, so he lied to protect them.  Now, he’s out of a job.  If a man can be right and wrong simultaneously, Tressel has done it.

It’s not that I have any patience for liars or those who knowingly break rules while leading young men who are in dire need of a quality mentor, but the NCAA as an organization of oversight is culpable for their role in this mess as well.

Tell the truth.  Always tell the truth.  That’s true not just for coaches like Tressel, but for everyone.  No result is positive enough to justify a lie.  Expedience is no excuse.  Wealth is no excuse.  Trumpian morality, the likes of which the Donald teaches on the various versions of “The Apprentice” has made the decision to tell the truth situational in our society, and what a tragedy that is.

Without men like Tressel being publicly scorned and dismissed for lying, I don’t know where the next generation of young men would learn to respect telling the truth as a virtuous measure of character.

Today was a bad day for Tressel and Ohio State football, but a great day for the truth as a relevant concept to motivate behavior.