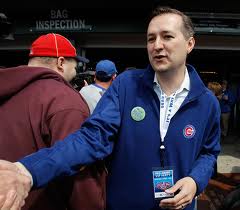 Ricketts daily routine involves an hour of shaking hands, and apologizing in advance to fans who bought tickets.

Rick Morrissey of the Chicago Sun-Times asked Chicago Cubs owner Tom Ricketts what’s wrong with his team.  The answer that came back as he reportedly sprinted away was, “Nothing, just a lot of injuries. We’ll be fine.”

Cubs fans are all hoping that Ricketts was avoiding the rather obvious truth that regardless of injuries, the Cubs are the third to last team in the major leagues because of something or someone else entirely.

Either Ricketts is one of those guys who was born on third base and thought he hit a triple, or he’s slow playing this hand like poker legend Doyle Brunson.   When you check-raise while holding cards with the pictures of team president Crane Kenney, GM Jim Hendry, and manager Mike Quade on them, you are either a genius or a moron.  Despite the fancy University of Chicago degree, I’m not sure which Ricketts is. 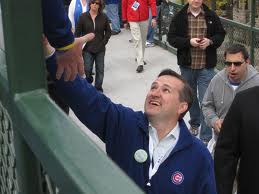 The soft ticket sales are more troubling than the injuries, and neither had anything to do with the other.  No Cubs fan pays good money to watch Soriano, Ramirez, or Soto.

There is no debate that the Cubs are playing terrible baseball in every measurable way but batting average.  They are last in the majors in fielding and ERA.  Minus a five steal game on Monday, they almost never run.  Home runs are being whacked at a pace that evokes the pre-1920 dead ball era.  The defensive range, minus Starlin Castro and Darwin Barney up the middle, is brutal when everyone is healthy.  The starting pitching has been woefully inconsistent in part because of the injuries to Andrew Cashner and Randy Wells, but also in part because Ryan Dempster and Matt Garza haven’t been very good.

The Cubs were a flawed team that won enough games to be exciting and make the postseason in 2007 and 2008.  Those teams, because of their flawed construct, were swept out of the playoffs.  The devolution of the 2009, 2010, and now 2011 editions has been painful to witness, and so much cash was spent on the veterans that Hendry has had no option but to play the hand he dealt himself.

It didn’t take a genius, even on the day of the signing, to look at the eight-years at $18 million per for Alfonso Soriano as a massive and foolhardy risk.  The extension for Ramirez was crazy as well.  Too bad it’s impossible to cut into Aramis like a tree to count the rings to tell how old he really is.  If he’s 33, I am too. 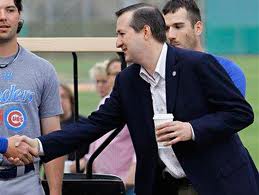 The weight for assembling this group of misfits falls squarely on Hendry’s shoulders.  I’m sure he has told Ricketts that he was told by the former owners to build the Cubs to win NOW – meaning ’07 and ’08 – when the Tribune Company was well aware they were selling the team.  That meant doling out cash like Pac-Man Jones making it rain.

What has Hendry done since?  Wandered aimlessly during batting practice looking for pending free agents to hug, and trade prospects for pitchers who haven’t done much to show that they were better than any of the prospects themselves.  The injuries might be an excuse, but who doesn’t expect players in their 30s to post diminishing performances.

It’s time for Ricketts to hire Pat Gillick as the president of the Cubs, and let Hendry serve out the final few months of the season as the GM.  Then, turn the whole thing over to the best baseball executive of the past 40 years.  Let Gillick hire whoever he wants to run the day-to-day operation, and Ricketts can go back to gladhanding in the bleachers and talking about how cool in is to own the team he watched from the bleachers when he lived across the street.

The Cubs are a franchise in chaos with massive and profound missing pieces.  They are eight games under .500 heading out of town for three game sets with the Reds, Cardinals, and Phillies.  They could come back 13 under, and be completely underwater.

Either Ricketts has a plan of attack to resurrect the franchise, or he laps up Hendry’s talk about the development of the farm system like gospel from on high.  Either he’s an incompetent rube who overpaid for a franchise at its zenith of popularity, or a shrewd guy who knew the Cubs were on the road to palookaville for a few years, and didn’t want to pay both Hendry and the new GM through 2012.  Right now, he appears to be an idiot who genuinely believes the current Cubs are snakebitten by injuries, but with a minor league system brimming with prospects a year away from being ready to usher in an era of greatness.

If Ricketts wants to convince fans it’s going to get better, he needs to do more than shake hands and redesign the bathrooms at Wrigley Field.  I thought Phil Wrigley was useless as an owner, but Ricketts is setting a new standard.