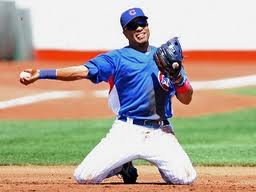 When did third baseman Aramis Ramirez turn 50?  In part, because of Ramirez’ uninspired play (i’m being very polite) the Chicago Cubs are the laughing stock of baseball.  With the sixth highest payroll in baseball payroll of $125 million, the Cubs have managed to win less games through 58 games than all but two major league teams.

And the beat goes on.  The Cubs have lost eight straight, and appear to have folded their tent.  There are so many places to point a finger of blame that I’m choosing to concentrate my attention on one player because to list all of the problems would fill a James Michener style novel – Aramis Ramirez – who appears to be the poster boy for the malaise that is at the root of the Cubs problems.

ESPN’s John Kruk and supposed ace Carlos Zambrano have recently called out the Cubs for being underachievers and idiots.  That seems about right.  During the fourth inning of last night’s 8-2 loss to the Reds, Aramis Ramirez appeared to have a ground ball hit by pitcher Edinson Volquez within reach, but failed to extend his glove to field it.  The ball slipped into left field for a basehit and the Reds extended their lead to 4-1.

With virtually every game, something happens that reveals Ramirez as a mope.  He’s never been a particularly adept fielder, but the way he’s going about his business this season is an outrage.  He’s not only a disgrace to the Cubs (which isn’t an easy bar to clear), he’s a disgrace to the game.

For those who watched Ron Santo overcome a lack of natural ability and type one diabetes to become a five-time Gold Glove winner, Ramirez is an embarrassment of lost will, eroding talent, and a void where his heart used to be.

Cubs broadcaster Bob Brenly questioned his ability to gauge Ramirez’ effort over the weekend, but said he couldn’t assign a percentage to it because no one knows what Ramirez at 100% looks like.  That’s why fans like Brenly – no sugarcoating.

And all that languor for only $14.6 million.  Unfortunately for the Cubs, Ramirez told some intrepid reporter yesterday who entertained the idea that another team might want Ramirez to misplay ground balls at an alarming rate for them, that he would not waive his no-trade clause should the Cubs ask.

Barring a massive teutonic shift in Ramirez’ offensive production, 2011 will be the seventh straight season that his slugging average has slipped.  That is the longest such streak for an everyday player I can find in baseball history.

The problems obviously don’t begin and end with Ramirez.  The pitching staff is a train wreck with the highest ERA in baseball, and it isn’t close.  The Cubs ERA of 4.86 is a full two-tenths of a run worse than the Kansas City Royals.  They are one error from the major league lead, and are tied for the worst fielding percentage in baseball.  Cubs hitters have walked 145 times – 19 times less than the team with the second fewest walks in baseball.

And the men who assembled and oversee this collection of ill-fitting unimpressive and too-well-paid group continue to operate as though everything is right on track.  Tom Ricketts is quickly sliding further down the ladder of idiots lucky enough to have inherited enough money to buy his hobby and run it into the ground.

Since acquiring the Cubs from the bankrupt Tribune Company almost two years ago, Ricketts has made no changes whatsoever to the structure of the front office.  Crane Kenney possesses every talent you would expect from a corporate attorney serving as the president of a baseball team – which is none.  And then there is Jim Hendry.

He’s the architect of this menagerie.  For anyone who has seen and loves the film ‘Brewster’s Millions’, Hendry must be a hero.  The conceit of the film was that Richard Pryor’s character is charged with spending $30 million without acquiring any assets of value.  Hendry has done it but with an inflation adjusted $125 million.

Hendry is a miracle of incompetence and foul mouthed stupidity.  I’ve told this story before, but in Cincinnati at the team hotel, my wife and I were sitting at the table adjacent to Hendry, Lou Piniella, and Matt Sinatro as we all had a late breakfast.  Young Cubs fans came by the table to get Piniella’s autograph.  The average age of these kids was eight or nine, and the entire time Hendry blathered on and on, peppering his conversation with loud f-bombs, CS, BS, and combinations of obscenties that were creative and foul.  I’m not prude, but even I temper my language in front of young kids.

That speaks to the character of the man, which would be inexcusable even if Hendry was good at his job, which he is not.  He has been relentless in overpaying for over the hill talent and cobbling together poorly matched talent.  After making some shrewd deals in 2002 and 2003, Hendry embarked on a roll of bad trades that continues.

And the beat downs go on.

6 thoughts on “How Far Can the Chicago Cubs Sink? Ramirez and Hendry Embarrass Team that Should Be Unembarrassable”