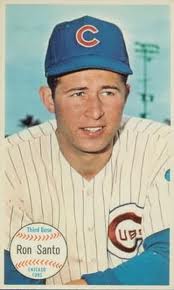 One year and two days after his death, former Chicago Cubs third baseman Ron Santo’s dream finally came true.  The Golden Era Committee in charge of the key to the gates of Cooperstown relented, welcoming Santo 37 years after his retirement from his beloved game.  Shame on them.

Santo spent countless years being mostly ignored by the Baseball Writers Association of America.  The high water mark of his candidacy for traditional admission was a paltry 43.1% of the necessary 75%.  In his first year, Santo received 3.9%.  The Veteran’s Committee wasn’t much kinder.  Every other year, Santo waited by a phone that would not ring – at least not with the news for which he hoped.

Then he dies, and the Golden Era (don’t ask me the difference between the Veteran’s Committee and the Golden Era folks) calls.  It bears mention that I hold am dealing harshly with the Golden Era people as though no changes were made from the Veteran’s Committee.  I don’t care enough about this gaggle of misanthropes to distinguish one group from the other.  It’s possible this is a kinder and gentler group of committee members, and they have simply corrected a wrong done by Joe Morgan and the other crank cases that punished Santo because he was a bit of a hothead and pain in the ass as an opponent.

If Santo is deserving of enshrinement now, he was certainly deserving two, four, six, and eight years ago.  He hit his last home run in 1974, and made his last out in the same year.  He’s like a guy who applied for a position more than 30 years ago, his resume’ remains unchanged after all that time, dies still praying to get the job, and only then is invited to join the staff – and the reason he gets it is principally because he died.

Make no mistake, I’m not a supporter of Santo’s candidacy.  But the way in which this was handled is exactly why so many people loathe so many other people.  This whole Santo election makes me sick to my stomach.  He doesn’t belong in the Hall, but if these tools were going to enshrine him, it should have been done while he could enjoy it.

There is no denying Santo’s enthusiasm for baseball and the Cubs, but the committees that determine entry had it right for 32 years after his eligibility.  The Baseball Hall of Fame should be reserved for the men who achieved unquestioned greatness.  If there can be a debate as to whether a retired player belongs in Cooperstown, he doesn’t.  Babe Ruth, Willie Mays, Johnny Bench, Carl Hubbell, Walter Johnson, Cy Young, Ty Cobb, and Henry Aaron are beyond argument.  Nellie Fox, Bert Blyleven, Richie Ashburn, and Bobby Doerr?  All very good, and now Santo is in that midst of the good who have been asked to play among the great.

Santo’s career was cut short by the effects of his diabetes.  No doubt his career statistics suffered because he was unable to play beyond age 34, but during his prime, it wasn’t all roses either.  Not once did Santo finish in the top three in MVP balloting.  He led the National League in a major offensive category only once – triples in 1964.  There were good numbers, but none that were great.  Nine all-star games, five Gold Gloves, hit .300 or better four times, drove in 100 runs four times, and hit 30+ home runs four times.  No trips to the postseason.

Sad to say, that’s not enough.  I wish it was.  I grew up loving the Cubs, and watched Santo for the last six years of his career on Chicago’s North Side.  I earned Bs for speeches in high school and college trumpeting Billy Williams hall of fame credentials – Bs because the poster boards I used for my corroborating materials were crudely rendered, and re-used because why the hell would I do new ones when nothing had changed.  Anyway, I digress.  I chose Williams instead of Santo because Williams belongs in Cooperstown.