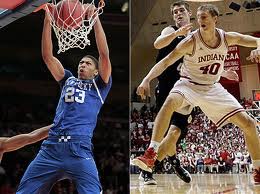 Indiana Basketball beat their neighbor to the south 73-72.  You know, the one that keeps kids around for nine months and turns them loose to the NBA.  Yeah, those guys in blue and white.

This is THE win that fans in Bloomington have waited for since disgraced former coach ran the SS Hoosier into a reef of illegal phone calls that almost claimed the program for good.  Kelvin Sampson was fired, and a majority of the players left as well.

Rebuilding seemed to take forever – the last three years have seemingly lasted forever – and while the Hoosiers occasionally mustered the energy and faith needed to battle obviously more talented opponents, it was clear that more was needed to get over the hump and beat someone real.

Today, Indiana beat someone real.  Kentucky continues to benefit from the asinine age restriction rule that prohibits high school kids from being drafted despite being ready to play in the NBA, turning its basketball program into little more than a one year basketball academy like IMG in Bradenton, Florida.  Indiana recruits kids who play and study, and hopefully will earn degrees.  And they work hard.

The Hoosiers battled back to win on a three-pointer from Christian Watford as time expired after blowing a double digit lead.  Threes rained through the hoop seven straight times after Indiana started 0-for-4, and they survived turnovers caused by Kentucky’s great athleticism.

For kids who have worked their asses off for years, this win was a sweet and well-earned reward.  Anyone who has spent any time at all covering Indiana Basketball has seen the sweat equity players invested without any promise of return at all, and over 60 losses that validated any cynicism.

The most incredible attribute of these kids and coaches is the dogged belief that motivated that work ethic.  People outside the program have asked why they kept working, but it never appeared that question was asked by anyone inside Cook Hall.  Loss after loss was met with hour after hour of dedication, arduous hours of shooting and lifting, and a faith that hard work would yield a positive result.

What a positive result this afternoon’s 40 minutes of play brought.

And for Kentucky?  I suppose all talk about abandoning this series in favor of scheduling someone else will cease.  After today’s game, they would look puny and intimidated by pulling the plug on the Hoosiers.

There are three more months of hooping left for these gifted soon-to-be pros, and this loss might be the best thing that could happen.  This loss to Indiana is going to smart for awhile, and might get the attention of those who played with marked indifference at Assembly Hall.

For Indiana, the players will be fueled by having their faith validated in such a profound way.  Later in the season, when the Big Ten (12) season gets tough, they’ll be able to look back at this game to fuel more work, faith, and mayhem.

This was one game of 30-plus games for both teams, but what a game it was.  And what an afternoon for Indiana Basketball fans, who have been waiting, hoping, pining for, dreaming of, and wanting more than anything else to see electricity and significant victories return to Assembly Hall.

To the team, coaches, and administrators – congratulations.  To the student body – leave Showalter Fountain alone.  Scattering the statues around campus is for NCAA Championships only.

And to Kentucky fans – Shut the hell up, and pay off all those bets.  I await your checks, or feel free to use Paypal.