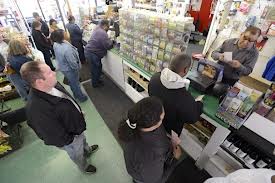 The Chicago Cubs blew another lead yesterday.  Up 5-0, they collapsed under the weight of Starlin Castro’s indifferent defense to gak up four unearned runs in the fourth to run their record to a predictably terrible 3-6.

Castro’s three errors in nine games has him on a pace for 50+, and three wins have lovable losers on pace for a 54-108 record.  History tells us that neither the Cubs nor Castro will be quite that bad, but 65 wins and 28 errors will be very close.

Year after year after year, the Cubs disappoint a fanbase that is both a loyal as the dog who waits every night on the front doorstep for his dead master – and just as stupid.

Cubs fans keep walking up to the ticket booth at Wrigley Field like the lemmings who stand in line ready to pour cash into a lottery system designed to fund schools, not make rich its lemming participants.

Attendance yesterday at Wrigley was 25,460, which is startling.  Chicago is a fun city – lot’s to do for free – and people dug into their pockets to cough up the cash to pay prices for tickets that are among the highest in baseball.

12,000 to Banker’s Life Fieldhouse, and the Cubs get 7,000 more than its capacity.  Not entirely sure who’s dumber, those staying away from the Fieldhouse or those who pour into Wrigley to watch bad baseball and drink beer at two and a half times the price of the bars across the street.

People mock the rich with caracatures that show them lighting cigars with $100 bills.  The only difference between those fat cats and Cubs fans is that between tickets, food, beer, and knick-knacks for the kids, Cubs fans are lighting two or three $100 bills.

The most galling part of the exchange is that there is no apology from the Cubs whatsoever, just an empty promise that money will be spent of talent once the farm system builds a little depth.  Then, we get the news that one of the magnificent prospects, Jorge Soler, has taken to chasing opponents around with a bat.  Even if Soler can’t play, watching him run around taking hacks at opponents is more interesting than the endless mediocrity that North Siders can’t wait to overpay to watch.

Stupidity on display everyday at the Lotto machine and the corner of Clark and Addison.

The odds of winning Powerball – 1 in 175,223,510.  The odds of the Cubs winning a world championship in 2013?  Considerably worse.  Powerball is looking like a better investment with every Castro error.