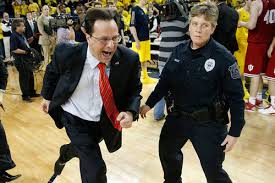 My guess is that Tom Crean is tired of seeing pictures of his less proud moments – like this one.

The desire to be the head coach at Indiana is irrational, and those who embrace it are more than a little screwy.  To expect anything else is ridiculous.

There are thousands and thousands of alums, students, boosters, kids, recruits, media, and fans of other teams that evaluate every public act of a coach at a program like Indiana.

The message board kooks light up coaches not only for their strategic choices, but for their quirks.  The media examines every single adjustment and substitution, and when a mistake is made, hell is raised.

When Tom Crean’s Hoosiers had trouble attacking Syracuse’s 2-3 zone, there were threads a mile long on message boards, and millions of texts exchanged that all said the same thing – that Crean is an idiot for not getting the ball into the middle.  When Michigan beat the Orange by popping the ball at the elbow to Mitch McGary, Indiana fans pointed at the screen and yelled, “SEE!”

Bob Knight has more than a few legacies that are still on full display within the Indiana Basketball fanbase, and a big one is that he taught everyone willing to listen enough about basketball to be very effective critics.  That, among many other things, makes IU a tough job for a head coach.

That Crean wanted the job makes him interesting.  That he seems the revel in being the coach at IU after five seasons makes him fascinating.  That people watching closely still can’t figure him out makes him one of the more enigmatic figures in sports.

“It’s lonely at the top,” is often repeated and rarely understood.  Being a coach is difficult because while all the subordinates (assistant coaches, players, support staff) in the organization has peers, the coach has no one.  The players all believe they should play more or be put in a situation better designed to feature their best attributes.  The assistant coaches are all doing time as they hope to be head coaches, but need to be sycophantic enough to hold onto their gig.  All share private moments of doubt about the coach.  It’s human nature.

Then there are the people to whom the coach answers.  The bosses need to be fed a narrative filled with attainable expectations, or the train can run off the track in a hurry, and all of a sudden, the wife and kids are being carted across the country to a new town.

That’s true at every job.  At Indiana, the pressure to improve and behave without fault is so intense that success is nearly impossible.

The constant critiques of Crean – both personally and professionally – would cause many men to dive under their desks and scream for the madness to stop.

My wife is a wonderful and generous woman.  As she watches the cutaways to Crean on the sidelines of Indiana games, she says with disdain, “Look at the way he drinks water.”  She’s one of the nicest people I know.  God knows what the rest say.

I yell about the pacing and posing, what I perceive to be the micromanagement, and the fact that he never sits.

Imagine going to your job, and having people critique the way you answer the phone, type, and twirl your pen during a meeting.  Once in awhile, people in my workplace have bitched about my typing – I hit the keys hard.  They say, “Man, you type loud.”  I always respond that I type with purpose, like Sean Connery told the kid who played Jamal Wallace in “Finding Forrester”.

The constant bitching and praising from fans is a given, and no one should apologize for it.  Sure, it shows a less than attractive side of humanity, but damn, none of us are saints.  This isn’t about the behavior of fans, and how it should be altered to make Crean’s life more pleasant.  This is about the craving that any man might have to coach at Indiana.

Crean clearly loves building the program, and accepting all of the ongoing challenges that go along with it.  Yeah, he makes roughly $3-million per for the trouble, but the din of the feedback is unending, and the loneliness would wilt the spirit of 99% of us.  There is no chance that a person who can successfully navigate the rising and falling tides of that position could be a person we might describe as normal.

This is a guy who wasn’t a good enough player to earn a spot on his high school basketball team, and somehow or other, he fought and clawed his way to the top of his profession.

There are people who wonder what the holiday dinners are like at Jack Harbaugh’s house.  You have “Captain Comeback”, a great collegiate quarterback at Michigan who played 14 years in the NFL.  John was a defensive back at Miami of Ohio.  The Harbaughs coached against one another in the Super Bowl two months ago.  That’s a table that might be tough for a brother-in-law, but Crean relishes being a part of the family.

What Crean has, he earned through the sheer force of his will and ability to never be dominated by a situation.  Maybe there have been private moments of doubt.  Alone, he may have buried his head in his pillow and wept, but he has never stopped moving forward publicly.

There are reportedly moments when he’s a jerk, and this isn’t an excuse, but to go from where he started to get to where he is makes for a great story of how someone who wakes up every morning with purpose can achieve something enormous.

Getting there is one thing.  Continuing to respond positively morning after morning when critical, deriding, and meanspirited tweets cascade constantly into his smart phone is quite something – not necessarily admirable – but certainly fascinating.