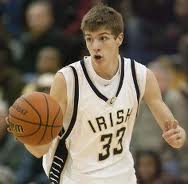 Collin Hartman played for the basketball championship of the state that treats the game like a religion.  He is an Indiana all-star from Cathedral High School, and next year will join the refurbished historic program of Indiana University.  And Hartman can’t wait to get started.

Like so many of those players recruited by Tom Crean, Hartman is a friendly and open kid, unafraid to talk about his goals.  He’s smart and ambitious, but not at the expense of the way he believes basketball should be played.

Indiana high school players have a well-earned affinity and talent for shooting the basketball from distance, and nothing Hartman might do once he gets to Bloomington will dispel that.

Hartman has a well-rounded offensive game, and is able to score from the block or on the perimeter.  His ability to guard wings on the perimeter needs to be evaluated by someone smarter than me.  I’ve only seen Hartman guard fours and fives.  He’s 6’7″, so he’s drawn the assignment to keep bigs off the block in games I’ve watched.

For a team that lost over 80% of its three-point field goals to graduation and the NBA, shooters are needed and Hartman has a solid resume’.

The knock on Hartman has been a lack of selfishness.  He’s not a kid who is likely to use the phrase, “I’m getting ready to take this game over.”  It’s absurd that basketball has devolved in some circles into a me-first game, and Collin hasn’t bought into that attitude.

From the way Collin’s eyes light up when he talks about the work he will be able to do in Bloomington at Cook Hall to prepare to contribute to the Hoosiers, he’s going to be a productive player.

Here are Hartman’s thoughts about going to Indiana to play for the Hoosiers (the video was private for a few minutes – back to public now):