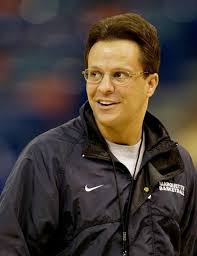 Tom Crean gets an A in elementary math for the second straight year.

For two straight years, Indiana coach Tom Crean has rolled through the spring with too many players committed for the 13 scholarships the NCAA allots, and for the second year he has looked damn smart in doing it.

There are some who worry about the morality of overpromising scholarships without having a concrete notion that what is being promised can be delivered.

Rosters are fluid in college basketball.  Players decide to leave for the NBA – as Victor Oladipo and Cody Zeller did last week – and others just want to move on to another school like Remy Abell.  Some like Ron Patterson can’t handle the workload in the classroom, and these guys are student-athletes after all.  A few like Matt Roth manage to hang on to an extra year of eligibility, but have no place on the team after earning a degree.

Indiana under Crean has been able to put together top five classes the last two years by oversigning, but haven’t had an instance where a scholarship has needed to be pulled, and until that happens, criticism of Crean’s methodology in unwarranted.

Fans can play the ‘what if’ game all they want, but Oladipo and Zeller did jump to the NBA for the big dollars that await.  Had they decided to stay, I’m sure there was a back-up but have no idea what it was.  As long as it was communicated honestly to the recruits, there is no problem.

Righteous indignation is the providence of the fan and media, and I enjoy practicing it myself, but 13 is the right number to land on and Crean has gotten to 13 the past two years without reneging, and that’s called doing his job effectively.  Maybe he’s a master manipulator of the roster, and maybe he’s been fortunate, but the fact is he has gotten to 13-13=0 twice with outstanding classes.

That’s the name of the game.  Scrambling to fill the last spot(s) of the roster is unacceptable.  Preparing for the unforeseeable is part of the recruiting process, and Crean has succeeded in either making excellent education guesses or getting lucky.  Either way, 13-13=0, and that’s the way great planning works.

There may have been some angst from kids and parents as they were certainly very aware of the oversigning issue.  Players down the end of the bench might have been a little nervous too.  But all’s well that ends well is the balancing act that is recruiting.

And there are reports that Indiana is continuing to recruit for next year, which would likely mean the end of the road as a player for the courageous Maurice Creek, whose battle to regain effectiveness after a series of debilitating injuries may come to an end without utilizing the fifth year of eligibility granted because of a red shirt season.  That may not allow Creek to finish his career in the way he might have liked, but the school owes a player the opportunity to earn a degree, and Creek has had that.

Players do not have a one-way option to continue to utilize eligibility until it’s exhausted.  Indiana has gotten a magical half of one season from Creek, who might have been the Big Ten Freshman of the Year in 2009-2010 if not for his first knee injury.  They have also seen him try to work his way back to physical competence.  He has been supported for four years in his quest to play the game he loves.  If Crean and Creek need to have a serious conversation about his future at Indiana, the slate is clean.

Fans deserve the best chance of winning.  The kids deserve a great education.  To this point, Crean has built brick by brick a program that can deliver both.