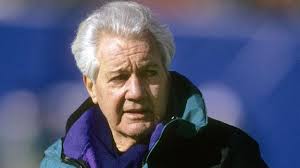 Not many can be both a broadcaster and cool guy, but Pat Summerall made both seem easy.

He sounded like an autumn Sunday.  Pat Summerall made it sound so easy and fun that for a time, he defined excellence in broadcasting.

Summerall was so good that many fans had no idea that he had actually played in the NFL as a kicker for 10 years for the Lions, Cardinals, and Giants.

It was easy to forget that you were listening to a broadcaster and not a friend during games.  Summerall was a good guy who didn’t give much thought to getting his calls on Sportscenter.  He just told us what happened, and seemed to enjoy it as much as we did.

There was a time in broadcasting, before Gus Johnson came along, when the job of a play-by-play guy was not to define moments for us, but to experience them with us.

I wrote about Verne Lundquist’s excellence while listening to him describe action at last weekend’s Masters.  Summerall did things in a similar way.  He didn’t prethink the event, or script his pithy final thoughts.

Summerall never tried to be anything or anyone other than who he was.  Confident, calm, and decent, Pat was a great guy to watch a game with.

Somehow or another, broadcasting has evolved into performance art that rewards the outrageous and verbose.  Summerall was never either of those things.

He reportedly had his battles, but they never seemed present in his work.

The NFL and Masters were never as cool again without him.

There are broadcasters like Mike Tirico and Joe Buck who are defining greatness for the next generation, but Summerall brought a real guy into our homes.

We’re down to Lundquist, Al Michaels, Dick Enberg, and the gold standard of Vin Scully from the voice of our youth who do their profession proud every time out.

Summerall said once that he and his partner Tom Brookshier walked into the press box laughing, and they left laughing three hours later.  That made me want to be a broadcaster, and happy that he was.